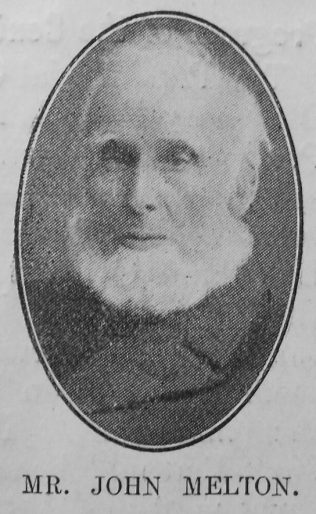 Transcription of Obituary published in the Primitive Methodist Magazine by R.W. Keightley

On September, 18th, 1909, there passed from earth to heaven one of the early “standard bearers” of our church. Mr. Melton had almost completed his ninety-second year when he fell asleep in Jesus. He was born in Norfolk, and spent fifty years of his life there. Converted when fourteen years of age he became a local preacher at sixteen, and was very familiar with the hardships of village religious work over seventy years ago. He knew what it was to take long journeys on the Sabbath and preach twice or thrice, and receive no material refreshment except what he carried in his pocket. His meals were often taken in country lanes because no home was open to him. He was closely acquainted with our founders and many of the early preachers. His home was their home for several years. Of Robert Key and others he could unfold many an entrancing story.

About forty years ago he came to reside in Hull, and became associated with Clowes Chapel.

His good wife predeceased him ten years ago, since when he has resided with his daughter and granddaughter, whose loving care filled the evening of his life with great comfort. All information of Connexional movements he eagerly read. For over seventy years he subscribed to our monthly magazines, and was very impatient to see them as soon as they were issued. Possessing far more than average intelligence, a cheerful disposition, a “meek and quiet spirit,” a most retentive memory, and not a little humour, he was a very efficient local preacher and an entertaining companion. He ungrudgingly served his generation by the will of God. His mental faculties remained intact to the last. Without pain of body, or cloud of mind, with no ailment but “ninety-two,” he passed peacefully into the “house not made with hands.”

His remains were interred in the Hull Western Cemetery on September 22nd, in the presence of a large number of relatives and friends, the service being conducted by the writer. This nonogenarian was a conspicuous saint, and one of the most loyal and devoted members and workers our church ever possessed.