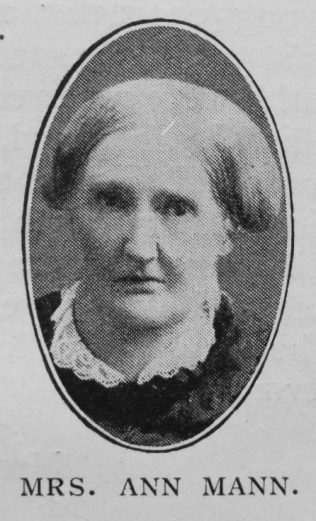 Mrs. Mann was born at Welshpool, March 12th, 1836. She early became a disciple of Jesus Christ, and joined the Wesleyan Church. She preserved till her death her first-class ticket,  dated Sept., 1850. In 1869 she became the wife of Mr. Robert Mann —a respected class leader and official of the Birkenhead First Circuit— when her membership was transferred to our Church.

In her home the family altar was erected; she taught her children to pray, and. it was her great joy to see them all workers in the Church. The crowning joy of her life was to give her son, Rev. D.T. Mann, to the ministry.

Regular in her attendance at the means of grace, she took a keen interest in the work of our Grange Road Church. A faithful and devoted wife, she strengthened her husband in good work. During the last years of her life Mrs. Mann was a great sufferer, but she was patient and resigned to the will of God, and on Friday morning, Nov. 26th, 1909, her spirit quietly passed away. The interment took place in Bebington Cemetery, in the presence of a large company.

Ann was born on 13 February 1835 at Welshpool, Montgomeryshire, to parents David, a sawyer, and Susannah.

Note: Online records identify a different birth date for Ann than stated in the obituary.