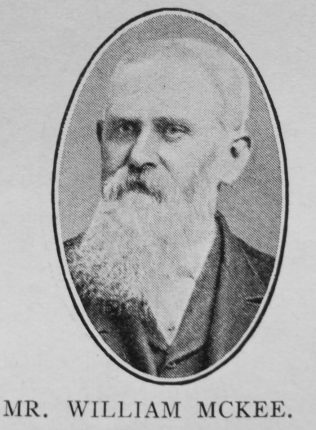 Transcription of obituary published in the Primitive Methodist Magazine by W.T.

William McKee was born May 14th, 1835, being also born again of the Spirit, at the Table of the Lord, in the Mariner Street Church, Hull. In 1855 he joined Mr. Newton’s Class, at Thornton Street Church, and began his real life’s work for the Master. Here he met the maid who became his wife, and through sunshine and shadow she right nobly mated him.

In 1857 the Quarterly Board authorised William McKee to take appointments as planned. In 1862 York Circuit called him to labour as Missionary. With gladness and success he served until his health, never robust, failed. Returning to Hull on his health being somewhat restored, he resumed his work for Christ and His Church. In later years he served the District Missionary Committee as Rural Evangelist, and in both Holderness and Lincolnshire, without fee or reward (save God’s smile), he travelled far and served many village churches, multitudes of souls being won for God.

He also lectured in the interests of many struggling Rural Trust Estates. William McKee also served as secretary of the Hessle Road Trust Estate., Hull, during the ministry of the Rev. Henry Clark, inaugurated a scheme to reduce the debt on the premises by £500, and with the hearty co-operation of his co-workers and the generous aid of the Connexional Insurance Company, the liabilities were lessened £1,200 during his secretarial term.

Failing health compelled him to quit his posts of active service that he might suffer for Jesus, and for long years he uncomplainingly endured the Cross, and cheerfully confided in God his Saviour. He now rests from his labours, which were more abundant, he having travelled mainly on foot, 5,800 miles, preached and lectured 2,500 times, and witnessed not fewer than 140 souls step out of darkness into light.

William died in 1909 at Hull, Yorkshire.