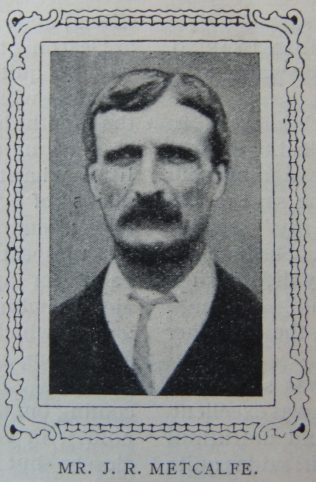 MR. JOHN RICHARD METCALFE, of Helmsley, surrendered himself to Christ when a boy, and has given the best of his thought and life to Primitive Methodism. When a child he attended our Sunday school, and is in it still as superintendent and teacher. He also renders efficient service as local preacher, Band of Hope worker, Class leader, trustee, and member of the choir. He preaches with acceptability, having a good voice, an easy, pleasant manner, and is very practical in his deliverances. As a Temperance worker he is pronounced and valiant. He is regularly in his place at Sunday and week evening services; a good listener, he seeks to retain the best in every man’s message. In some country towns most of the privileges and favours are bestowed upon those who attend the Church of England, with her Romanising proclivities. Mr. Metcalfe has for many years by fidelity to principle and loyalty to his own Church, helped to preserve religious freedom and maintain Protestant principles.

He has been a Class leader for many years. At first he was appointed assistant and then leader, at his father’s death.

He visits the sick members of his Class, and conducts prayer meetings in the homes of those who are unable to attend the services. He confidently maintains a Class meeting is the best means of grace for the cultivation of Christian life, and expresses much concern respecting the lack of interest taken in these services. He attributes our Connexional decrease to lack of fellowship, and pleads earnestly for the resuscitation of the Class meeting. His father, whose Class our brother still leads left a rich legacy of influence for good. May he by following in the footsteps of his father, prove himself worthy of the accumulated wealth of piety and service which is his by inheritance.

John was baptised on 11 April 1859 at Helmsley, Yorkshire. His parents were John, a woodsman, and Alice.