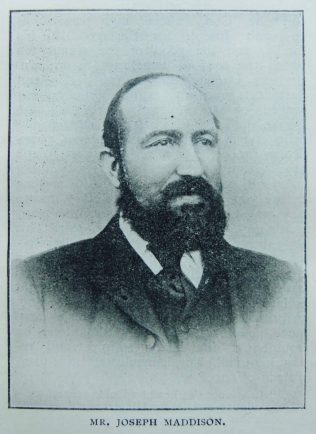 Transcription of Sketch in the Christian Messenger by W.D. Judson

A somewhat striking figure in the Conference held at Sheffield in 1901 was that of a fine specimen of humanity sitting on one of the seats allocated to the delegates of the Darlington and Stockton District. Five feet ten in height, proportionately well-built and of ruddy countenance, the picture of health and strength, Joseph Maddison presented the Conference with at good specimen of a dalesman. He was certainly not one of the self-important chatterers sometimes to be met with in Conference. Modest and unobtrusive, closely attentive to business, few of the delegates, however, gave a more intelligent and conscientious vote than did he, and but few of the many Local Preachers of our Church are more worthy of respect and honourable mention.

Mr. Maddison is one of our most highly respected local preachers on the Westgate Circuit, Weardale, in the Darlington and Stockton District. Born in 1857 at Frosterley, in the Westgate Circuit, where he still lives, he is now in the prime of life. His father and mother, the latter of whom still lives, joined our church at Frosterley nearly forty years ago. His father, who was a most devout man and one of our class leaders, often expressed a desire to his members that he might be permitted to die in God’s House. In the year 1895 he attended a service in our Frosterley Chapel, conducted by Rev. J. Flanagan, and while repeating the last two lines of the opening hymn death suddenly seized him. Thus with song of praise and aspiration still hovering around his lips the devout soul passed into the presence of its Lord. Three sons and one daughter of this pious couple are still alive, and are all members of our Church. The daughter, who recently married Rev. B. Dennison, one of our promising young ministers now travelling in Stockton, is a worthy helpmeet to her husband on that station. The three sons are connected with our Frosterley Church, Mr. W.T. Maddison being a Class Leader and School Superintendent.

Joseph Maddison, the subject of this sketch, being the eldest son, was obliged, much to the regret of his schoolmaster, to leave the village school at the early age of eleven years to work in the quarry with his father. His grandfather, a man of somewhat superior education, and who was interested in Sunday School and Band of Hope work, appears to have been specially attracted to the bright, sturdy lad, and early took him to the Sunday School and Band of Hope, and induced him to sign the temperance pledge. Mr. Maddison has significantly pointed out that if at this point in his life there had been some special provision for encouraging and recognising children as members of the Church he would doubtless then have commenced the Christian life. As it was, at about the age of fifteen he became somewhat neglectful of chapel and school. Fortunately he had a godly and tactful Sunday school teacher, Mr. George Proud, of whom, though he is now in British Columbia, Mr. Maddison still speaks with the tenderest affection.

In 1873 the Rev. R. Fenwick was conducting Revival Services at Frosterley. At the close of the services one Sunday, young Joseph and a friend had a conversation together on religious matters, which resulted in their decision for Christ at the service on the following Monday evening. Soon after the subject of our sketch became a teacher in the Sunday school and its Treasurer – positions he still retains. For nearly twenty years he has also acted as Chapel Steward.

He became a local preacher in 1879, in the days before there was any “trap-hire” on the station. Winter journeys of fourteen miles each way to services in the higher part of Weardale were a tax even for a typical dalesman, and the effects were often felt until the following Wednesday. But the work of the quarry had to be faced at seven o’clock on Monday morning. Mr. Maddison, when speaking of some of those journeys, has affirmed that the sweetest morsel of food he ever tasted was a piece of gooseberry cake he ate one midnight on a doorstep in Stanhope while returning from one of his appointments in a snowstorm. But constancy and grit have always been qualities to be relied upon in the character of Joseph Maddison. As a preacher he is somewhat deliberate in manner, and his utterances are always intelligent and marked by great sanity and moderation. Beneath the quiet exterior, however, there are occasional gleams of an intensely earnest religious nature, and his fellow-dalesmen feel that behind the message is the man – a fine personality and a noble character.

Mr. Maddison’s views of the Christian life are by no means narrow. He has therefore not declined to take his share in the larger ministry possible to a Christian man outside the sphere of the Christian church. He has served on the local School Board since its formation twelve years ago, only one person polling a larger number of votes at the last election. He has also served on the Rural District Council since its formation six years ago; is President of the local Liberal Committee; and a Governor. of the Frosterley Endowed Schools Charity. Some years ago the Endowed Schools Charity was wrested from the grasp and exclusive manipulation of the Episcopal Church. Its funds are now used to provide scholarships, by means of which it is possible for any working man’s child in the village to win a free education at the Wolsingham Grammar School. In 1879 upon the formation of the Frosterley Lodge of the Cleveland Miners and Quarrymen’s Association, Mr. Maddison was made its Secretary; afterwards being appointed on the Darlington Quarrymen’s Joint Committee of Quarrymen and Masters. Upon the Cleveland Miners and Quarrymen’s Association deciding that the quarrymen in the Association should have a representative on the Executive Committee, the quarrymen at once proceeded to unanimously elect Mr. Maddison. In 1884 the Association was invited to appoint five members to serv e on a deputation to meet Mr. Gladstone for the purpose of discussing the question of the proposed extension of the franchise. Mr Maddison looks upon his selection as one of the five, and his subsequent interview with Mr. Gladstone at the Home Office, as one of the greatest honours of his life. His neat little home is named “Gladstone Cottage.”

It will easily be understood that Mr. Maddison has had considerable experience in the investigation of labour grievances, and labour questions generally. There has, however, been no general strike during his official connection with the Association. Doubtless he has himself contributed in no small degree to the spirit of conciliation by which this sad resort has been averted. From his experience he is of opinion that one of the greatest drawbacks of the labour movement is perhaps the difficulty to get working men to take sufficient intelligent interest in their own concerns. Apathy sometimes renders it difficult to even preserve the privileges and rights already won. Among large bodies of working men there are, of course, certain to he some ignorant, unreasonable men, actuated by the lowest motives; but Mr. Maddisons experience is that there is less and less disposition among the men to be guided by inflammable and correspondingly noisy factions. One of the most marked changes of the movement, in his opinion, is its growing spirit of conciliation. We have by no means heard the last of labour problems, and the most prescient minds see in their future treatment great possibilities for good or evil. It is a matter of the greatest importance that Christian men continue to import into the deliberations of organised labour the spirit and principles of the Christian religion, and we sincerely hope that Mr.Maddison’s many-sided Christian life may be long spared for increasing usefulness.

Joseph was born in 1857 to parents William Maddison and Barbara Thompson. William was a limestone quarryman.

After his career as a quarryman, the 1911 census identifies Joseph working as a poor rate collector.