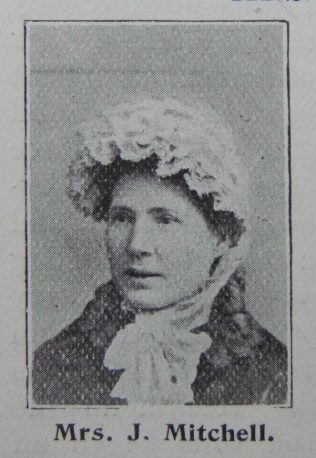 Transcription of Obituary In the Primitive Methodist Magazine by John Mitchell

Ruth Stuart Mitchell, wife of the Rev. John Mitchell — who on her father’s side was descended from a line of Yorkshire yeomen who had lived on their own farm for generations, and on her mother’s side from the sturdy old Yorkshire Burdetts —was born at Bird Lane Farm, Thurgoland, February 5th, 1838. Her parents being members of the Wesleyan Church, she was brought up under godly home influences; but losing her father when twelve, and her mother when sixteen years of age, and being thenceforth entirely dependent upon her own exertions for a living and having to reside for a time under conditions inimical to godliness, she lapsed for awhile into indifference to God‘s claims and her soul’s interests. In the autumn of 1857, however, when passing the Primitive Methodist Chapel, Batley, and seeing a notice that evangelistic services were being held every night, she said to her companion, “Let us go to-night and see what these Primitives are like.” They both went that evening, and she was so “pricked in the heart” that, though her companion scoffed, she remained to pray. She at once joined the Church and Sunday School, and threw herself heartily into any kind of work for the Master that offered.

About six months after her conversion, one Saturday evening, the minister, the late Rev. Henry Harris (afterwards President of the Canadian Methodist Church) having failed to secure a supply for the pulpit at Hightown, and having noted her great power in prayer, and facility of utterance, at the close of the Band meeting, asked her to preach on the Sunday afternoon. She would have declined at once, but for the fact that on the preceding night she had had a remarkable dream of the Day of Judgment, in which to her surprise she found herself on the left hand; and in reply to her plea that she trusted exclusively in Christ and possessed the witness of the spirit and therefore should be on the right hand, the answer thrice repeated came from the Throne: “Yes, but you have done no work for Me.” However this dream may be interpreted, it so influenced her that she dared not refuse to attempt the work thus unexpectedly offered, and which in fact determined her future career. Having consented, she spent the greater part of the night in prayer and preparation, and the next day walked three miles to Hightown, and spoke with such acceptance and power that the officials there and then engaged her to preach at the forthcoming anniversary. Having passed the necessary examinations, her name appeared on the plan of the Dewsbury Circuit (which at that time included what are now the Heckmondwike and Batley Circuits). And thus began an evangelistic career not often paralleled.

In the autumn of 1861, she was requested to conduct a week’s mission at Yeadon, in the Otley Circuit, where we had a very feeble Church and a virtually empty chapel. The week’s mission extended to three weeks; nearly 200 professed to find peace, many joining other churches, but nearly 100 attached themselves to our Church, and made what had been almost the weakest church in the Circuit one of the strongest, and the Yeadon Society dates its vigorous life from that mission. Nearly all the places in the Circuit asked for her services in turn, and “the Lord went with her confirming the word.” At Otley in particular a remarkable work of grace occurred, and amongst others, the late Mr. John Crossfield, for many years the Circuit Steward and a tower of strength in the Circuit, was led to decision.

In July, 1865, she was united in marriage to the writer. Prior to this, on the ground of health, she had been compelled to restrict her labours somewhat, and hence, after marriage while throwing herself with great heartiness into the work of the Church, she did not preach above four or five Sundays a quarter, but always with the old acceptance and power.

Unfortunately in July 1868, one month after her second son was born, we removed into a damp house, and this wrecked her health for life. For about six years thereafter she was never able to attend a place of worship, and until her death, never passed a day without much suffering. For one who had done such active and joyous service, this deprivation of the means of grace and opportunity to serve was a great trial. The medical treatment we secured having failed to effect a cure of the severe ailments from which she suffered at her suggestion I studied homoeopathy, under which by God’s blessing, she experienced great relief, so that in after years, she was able to preach occasionally, and sometimes to take a class in the Sunday school, or to lead a society class, and in other ways, but often at the cost, of great pain, to engage in the work she loved. But the sufferings of those early years (intensified by straitened means, for the salary then was only 23s. per week) left an indelible impression on body, mind, and heart. Few indeed have suffered more, but through all she bore a brave heart, and never relaxed her trust in God or failed of her duty to her household. Never was there a more faithful wife, a more self-sacrificing mother, or more thorough housewife.

Her last illness began in December, 1900, with spinal irritation, followed by pneumonia and heart disease, to which, after being confined to her room, and chiefly to bed, for six months, she finally succumbed. The end came suddenly and unexpectedly. The over-taxed heart, already damaged by the pneumonia suddenly collapsed without a minute’s warning, and she died of heart failure on June 15th, 1901. No word of trust or hope was spoken by her as she passed into the shadow of the unseen, but none was needed. Her whole life was “bid with Christ in God.”

As notable features of her Christian life and experience, I might mention (i) Her remarkable power in prayer. This she possessed from the time of conversion, and I never knew her equal in the days of her strength.

It was no uncommon thing for her to get answers, as it were in words, and to declare that the Lord had told her so and so, and her predictions thus expressed were always fulfilled.

(ii.) Her delight in the Word. Few knew their Bible so well, quoted it so accurately and frequently, or had such deep spiritual insight into its meaning.

(iii.) Her love for the means of grace, especially prayer meetings. At what cost she attended them was fully known only to herself and God. Though she knew a night of sleeplessness and pain would follow, she would attend whenever she had the strength to walk.

(iv.) Her strong faith in God’s love and faithfulness. Despite her trying experiences, this never faltered, and her hopes with regard to the future are well expressed in the first and last verses of one of her poems:—
0 death, thou only art a name,
When to God’s children given;
Thou cans’t but break the mortal frame
For fuller life in heaven.

The grave, illumed by love divine
Will yield its willing prey;
And oh! the glories of that morn,
The resurrection day.

Of testimonies to her worth I select only one. The Rev. T. M. Lakin, my colleague for two years, writes: “She was a truly noble woman. I owe much to her. As I came into contact with her week by week her sympathy, intelligence, deep spirituality, and intense interest in God’s work in the Circuit, inspired and stimulated me. I have never met with anyone for whom I had greater esteem. She was a burning and shining light. A vessel unto honour sanctified, and meet for the Master’s use and prepared unto every good work.”

Ruth was born to parents John and Elizabeth Steward (later Stuart) at Thurgoland, in the parish of Silkstone, Yorkshire on 6 February 1836 (two years earlier than it says above).  She was baptised at the Carver Street Wesleyan Methodist Chapel, Sheffield, on 6 March 1836. John worked the land.