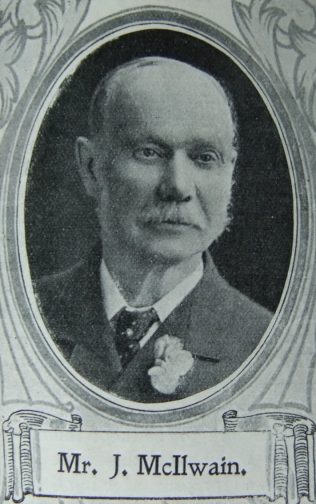 The Circuit is fortunate in possessing the services of Joseph McIlwain. The fact that for twenty-two years he has been manager of the Abstainers’ and General Insurance Company for Scotland is proof of his business acumen. Born in the Emerald Isle in 1846, he possesses all the Irishman’s native wit and humour.

Resident in Scotland since 1867 he is admirably acquainted with the people amongst whom he dwells. From the time he came to Glasgow until his conversion he was only twice in a place of worship. He was converted in a cottage meeting conducted by working men in December, 1874, joined the Primitives in 1875, and since that time has been a consistent and loyal worker. A total abstainer these thirty-three years, he is in complete sympathy with every form of temperance toil. Happy is he in the co-operation of a devoted wife. Their home, “Tullabeg,” is gratefully remembered by many who have enjoyed its hospitality. Long may Joseph McIlwain be spared!

Joseph married Margaret Keir (b abt 856). The 1901 census return identifies one child.