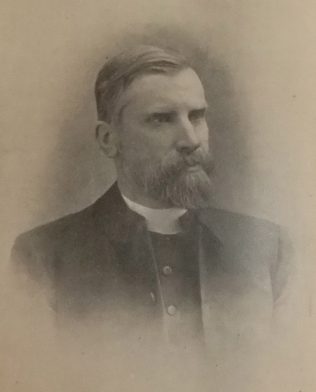 Tom was born on 29 October 1846 at Newbury, Berkshire to parents Thomas Pinnock and Mary Norris. Thomas was a leather dresser and Mary a glover at the time of the 1851 census.

Tom was converted at the age of fourteen, while listening to an address In the Newbury Sunday school by Mr Samuel Turner of Reading. Two years later he was on the plan as a local preacher.

At Swindon, Tom superintended the erection of Regent Street Chapel.

Whilst at Oxford, Tom attended University classes through ten terms taking classics and mathematics. Whilst at Birkenhead, Tom served as Secretary, and afterwards as President, of the Free Church Council.

Two years before his death, Tom finally achieved the degree of Doctor of Literature.

His obituary records that he was richly gifted – had a beautiful voice, a mind well-stored and disciplined, and was prodigal in service. He was in great demand as a preacher and lecturer.

In the April before his death, he went to supply in Glasgow for a Presbyterian minister who was doing duty as a chaplain in the Army.

Speaking at his funeral, Rev F.W. Henishall said; “Preaching with him was a passion. It was for that he lived, for that he prayed, for that he worked. In his sermons there was intellectual power, expressed with lucidity and beauty of diction; and as he spoke, men felt that behind the word there was true manliness, and in his soul there was true sympathy. I think if I had to sum up his religious life in one word, I should say that he was a wonderful combination-the practical man and the mystic. He had a living interest in his people. He studied and knew them, and so in his pulpit messages it was to them he could speak. And as he spoke new hopes were born, new ambitions were kindled, new light came.”