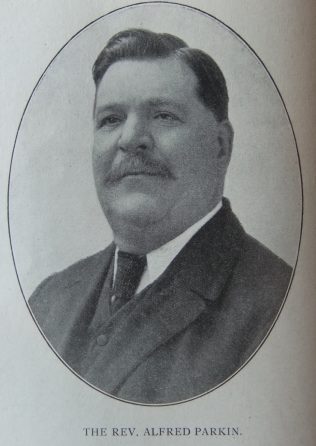 Alfred was born on 15 February 1867 at Middleton-in-Teesdale, Co Durham, to parents Jonathan and Jane. Jonathan was a lead miner.

Alfred became a local preacher in the Westgate Circuit, his family having moved to Stanhope. Before entering the ministry, Alfred conducted missions at Bowlees, Middleton circuit and St John’s Chapel, Westgate, and then served as a hired local preacher at Birkenhead.

Whilst at Bromsgrove, Alfred served as Secretary of the District Equalisation Fund. Whilst at Chesterfield and Worksop he served for six years as District Sunday School Secretary.

At Canaan Church, Nottingham, Alfred had an eventful time. In the first year Conference was entertained. In the second year Zeppelins dropped bombs on the church.

In Nottingham, Alfred was also engaged in Y.M.C.A. work, meeting the soldiers at the trains, and putting in all night work in the interests of the men.

At Sunderland, Albert was Chaplain for the Military Hospital. Albert also undertook seaside missions; three seasons at Bridlington and one at Yarmouth.

Alfred married Harriet Louisa Cowling (b1868) in the summer of 1898 at Wallingford, Berkshire.

Alfred died on 18 April 1930 at Dudley, Staffordshire. He was buried at Grantham, Lincolnshire.