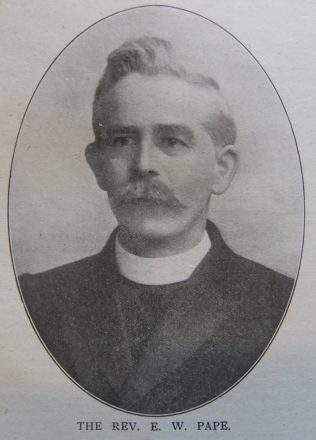 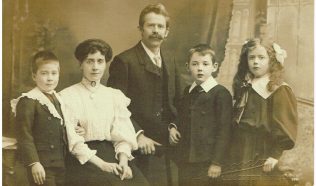 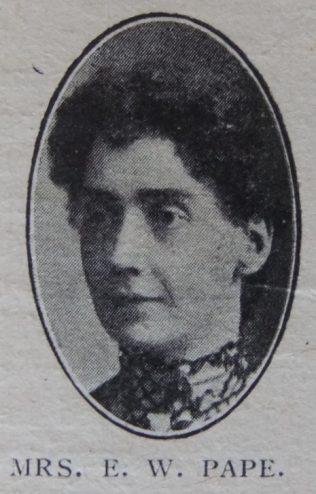 Edward was born in 1869 at Osbournby, nr Sleaford, Lincolnshire, to parents Wattam Pape and Mary Ann Wright. His parents were Wesleyans. His father, a blacksmith until the age of eighty-five, was a class leader and held the position of Sunday School Superintendent for over forty years

Edward left home to take an apprenticeship in Grantham, where he joined the PM Society, being attracted by the gifts and personality of Rev J Tolefree Parr.  He soon began to preach and was known as the boy preacher. At the age of nineteen, Edward entered Hartley College.

Edward spent many years in the Nottingham District. He served as secretary of the District Furnishing, Christian Endeavour, Sunday School, and Missionary Committees.

For many years Edward arranged the Song Service for the Sunday School Magazine.

His obituary records that at all times Edward was a Christian gentleman, with a graciousness and charm of personality which endeared him to a host of friends. His rich gifts of mind and heart brought inspiration and blessing to his congregations, and into the homes of his people he carried the tenderness, the understanding sympathy, and the love of the Master.

His retirement years were spent in the quiet surroundings of Ockbrook, near Derby, where he gave himself wholeheartedly to serving the village cause. His leadership and pastoral care quickened it into new life.

Edward married Eliza Marie Wood (1872-1926) in the summer of 1896 at Grimsby, Lincolnshire. Eliza was a daughter of Joseph Wood.

Edward died on 10 May 1950 at Ockbrook, nr Shardlow, Derbyshire.

Pape-EW (48 KB Adobe Acrobat document, opens in a new window)
Transcription of obituary published in the Minutes of Conference.