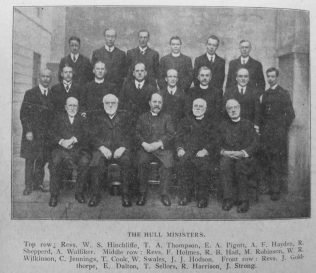 ERNEST D. PIGOTT: born at Hull in September 1882. After training at Hartley College, he began his ministry at New Wandsworth in 1908, and served with ability and devotion in all his circuits. His happy disposition and honest goodness gained him the affection of his brethren and all among whom he ministered. He won a growing reputation as speaker and preacher, and, though never physically robust, his bright and courageous spirit bore him through many labours. He passed away peacefully at Northampton on June 14, 1933, in the fifty-first year of his age and the twenty-fifth of his ministry.

Ernest was born in September 1882 at Hull, Yorkshire, to parents Enoch Pigott, a ship’s carpenter (1901), and Mary Ann Duffill.

The 1901 census return records Ernest as an hydraulic packer.