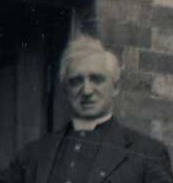 My great uncle and his wife Florence went out to Northern Rhodesia as missionaries in 1906. I discovered copies of his letters and articles he wrote in the annual missions book at the archives at the Institute of African and Oriental studies in London. I also have a copy of his obituary from the Methodist recorder in 1967.

My husband and I were fortunate to go to Zambia and visit the village where he was first stationed. We saw the remains of the church he built as well as the new church, visited the school and clinic and saw the grave of their baby.

The only photos I have are copied from books – Florence took lots of photos and I often wondered what happened to the originals.

He remarried and was living in Wolverhampton when he died in 1967. I wonder whether anyone remembers him?

John William Price was born in 1878 in the village of Costock, Nottinghamshire and soon after moved with his parents to Lancashire where his father became a police officer. He grew up in the mill towns of Lancashire with his brothers and sisters and on leaving school he worked in the mills. During this time he studied at night school and he travelled with the mission van connected with the Primitive Methodist Church. He then trained as a Primitive Methodist minister at the Hartley Victoria College, Manchester, and was ordained in 1903. He married Florence and was minister in Norwich for 3 years.

On 25th August 1906 he and Florence set sail for Cape Town on board the ship Kenilworth Castle of the Union Castle Mail Steamship Company. They then made the arduous journey to Nanzela in Northern Rhodesia, (now Zambia), where they  joined Rev E W Smith and his wife at the Baila-Satonga mission station. Rev. Smith  stimulated John’s interest in the language and customs of the Baili people and he was soon able to preach to them in their own tongue. During his years as a missionary he wrote a book on hygiene, translated books of the Bible, including the Psalms, and wrote hymns in the Ila language. In 1924 he wrote “ the attempt to put the Psalms into Ila verse brings its own delight as well as at times a feeling of despair.”

During his early years at Nanzela John was involved in the planting of crops and fruit trees but their attempts were often thwarted by either too much rain bringing floods or drought.  In 1907 he reported the delivery of 4 dozen apple trees, 6 orange trees and guavas. The bananas, peach, pineapple and lemons were doing well and they had a good market for cotton with 100 plants doing well. Despite the climatic difficulties the crops were generally successful and the local people were helped with farming techniques and supplied with tools.

The mission provided medical care and Florence had trained as a midwife. Florence cared for children – many of them orphaned or abandoned. Schools were set up and John’s tall erect figure was often seen walking along bush paths as he travelled to inspect schools, preach and evangelise.

Unfortunately Florence had periods of bad health and suffered miscarriages and the death of their only baby. However this did not hinder her work with children and she recorded their time there with many photographs.

Travel in the region changed considerably over their time in Rhodesia. They would have taken a train part way and then have to walk a considerable distance – Florence being carried in a hammock – and all their luggage carried. Rev. E. W. Smith described his arrival at Nanzela in 1902 – “Our journey from Aliwal North in Cape Colony – first six days by rail to Bulawayo, then eight weeks by wagon to the Victoria Falls and the last 200 miles or so I on foot and Mrs Smith carried in a hammock.”

In 1912 after a period of furlough in England John wrote that they had arrived safely at Kalomo after a pleasant voyage and a more than usually bearable train journey. He had not succeeded in getting a horse at Kalomo so was compelled to walk the 80 miles to Nanzela.

In July 1929 he wrote that he had bought a car in Capetown! – a 6 cylinder Chrysler which he had converted to make it suitable for long distance travel and his mission work. He and Florence then drove back to Kasenga (he moved there in 1919) visiting friends on route and spending nights in the car. He wrote that the last 350 miles in 2 days on such roads were no joke.

Christmas at Nanzela consisted of the church packed beyond its door for a service, sports and uproarious fun afterwards, but evening brought quiet and memories of home. However John and Florence’s first Christmas was very different. They spent it as guests of their magistrate at Namwala along with every other white men and women in the area, (Florence and Mrs Smith were the only white women present). They travelled by cart accompanied by Sezungu, their local chief, and a crowd of his people led by a band. They arrived at Namwala to find very primitive conditions and spent the night in a hut without a door – lions and leopard were known to roam the area! However the welcome was warm and the entertainment memorable – the climax being a mock battle between two parties of natives who then, with raised spears  forwarded on mass slowly towards them.  John wrote that in 1906 they felt like pioneers in a new country.

In 1919, following a year in Hull back in England,  John and Florence moved to Kasenga where John was the superintendent minister over several missions in the region. They were there until 1933 but it seemed that his first love was for Nanzela. In his final years at Kasenga John worked hard building a girls’ block to the school and teachers’ houses. By this time the union of the Primitive and Wesleyan Methodist Churches was taking place and the extra work and politics of this, plus the fatigue of nearly 30 years in the mission was taking its toll on John. He had considered retiring on several occasions but had been persuaded to continue. He was determined to finish his translation work before leaving. A telegram was sent from Choma on 26th August 1933 saying –“Going immediately – Price”.

John and Florence had no children of their own but adopted two mixed race children – Leonard and Susie. They educated the children and put Leonard through theological college and he became one of the first African Methodist ministers. Susie, I believe, became a nurse. Leonard wrote of the love and support he received from John and Florence and took the name Rev. L. W. Syaapela Price. (Leonard William). He was ordained in 1932 – a year before the Prices left Rhodesia – and was minister to his own people in Nanzila, and  in 1940 was at Kasenga with Rev. Will Harrison. In 1960 he was a supernumerary (retired) minister. Leonard married  Mary Penny – also mixed race – who John and Florence put through college to train as a teacher. If they had children could there still be people with the name Price in that region of Zambia?

In 1937 there was an article written by Syaapela in the “Kingdom Overseas” book of the Methodist Church. After being posted to Nanzila he undertook the task of travelling and examining the life of the people in the neighbourhood. He also held meetings with local chiefs to make plans for improving rural life. They discussed education, sanitation and agriculture. Syaapela was very encouraged by the response.

Back in the UK

On his return to England John  was minister of churches in Manchester, Ramsmor and during the war years, (1938 – 1945) was superintendent minister at Dunstable and then moved to Watton. He continued to support the Overseas Mission branch of the Methodist Church. He retired in 1948 and had an active supernumerary ministry at Craven Hurst in Bedfordshire. During this time Florence had died and he later remarried. He moved to Wolverhampton in 1957 and died in 1967.

Quoting from his obituary in the Methodist Recorder, February 23rd 1967;

“ Mr Price had a very great love for the African people and they in response had a similar love for him. This affection was shown in many practical ways – typical of a man who lived for others. Although quiet and gentle in manner he was firm in his Christian convictions and strong in leadership. He could not under any circumstances tolerate any form of racial discrimination, but saw all men as children of God.”

John was my mother’s father’s brother – my great- uncle. I never met him but my mother remembers him and Florence visiting the family when she was a child – they took her an African doll and spoke at her school.

Information obtained from the Methodist Missionary records at The Institute of African and Oriental Studies, London.