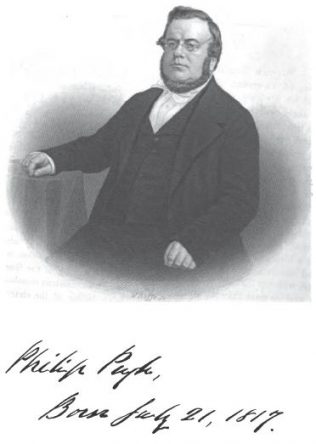 Philip was born on 17 July 1817 at Shrewsbury, Shropshire, the youngest of six brothers. Philip’s father was a Wesleyan local preacher, along with one of his brothers. Philip worked in a factory as a child and enjoyed reading English grammar. He joined a Primitive Methodist Sunday School at the age of 13, and shortly afterwards was converted through an address by the Sunday School Superintendent, Mr John Drayton. Philip started to preach at the age of 16 and was soon seen as a potential itinerant Minister.

Philip’s home circuit, Bishops Castle sent him, aged 17 to work on the Belfast Mission. He also served in Lisburn before returning to England.

The Jubilee Church at Tunstall, where Conference was held in 1860, was enlarged and renovated under Philip’s superintendency.

Phillip was appointed Connexional Editor in 1867. Editorial work was his delight.

Philip was President of Conference in 1869.

His obituary says that Philip was much beloved by his colleagues and the people of his charge, and greatly respected by ministers and members of other communities.

Philip died on 31 January 1871 at Newcastle under Lyme, Staffordshire.

J Petty, The History of the Primitive Methodist Connexion, 1880, p488

A Pritchard, Memoirs of the Life, Literary and Itinerant Labours of Rev. Philip Pugh. [ with Mr. Pugh’s Lecture on Education ] , 1871