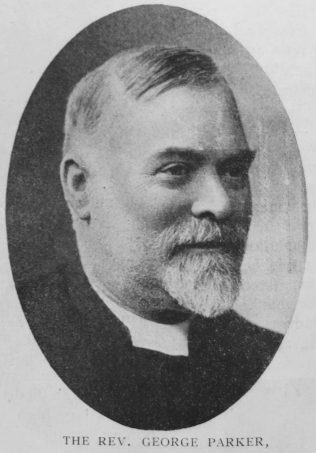 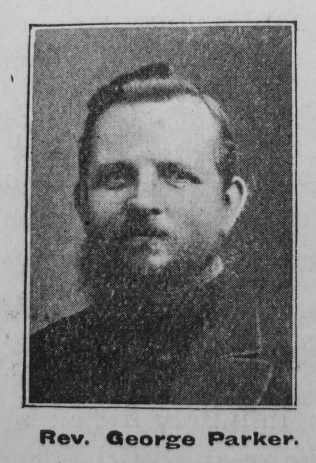 Transcription of Obituary in the Primitive Methodist Magazine by H.O.H. Richardson

In the passing of the Rev. George Parker another link has snapped that united the present with the strenuous years of our church’s history in the second half of the last century. To these warriors of the Cross we owe a greater debt than words can pay. Perhaps their greatest satisfaction is to know their works do follow them.

Our now sainted friend was descended (as a private family history shows) from an ancient and honourable family, which can be traced back as far as 1156 to Walter de Preston, the King’s hereditary Forrester. The preface to this private history says:— “The family held at one time one fourth of Preston (near Hull) and three other manors and their properties, but now not an acre is left. They left Preston after confiscation and the Reformation and returned again in 1723.” The surname Parker from Park Ranger or Forrester came into use about the middle of the 14th century.

The subject of this sketch was born at Lelley, near Hull, June 11th, 1835. He removed to Hull when a boy, and was converted in tender years in one of our Sunday schools. Conversion was followed by active Christian service that commended him to the favour of his Church. When about 24 years of age he had arranged to be married, but the Rev. George Lamb came from London and sought him for the work of the ministry. The Rev. John Petty objected to him leaving home, and accordingly he began his ministerial career in Hull, being “pledged” by his own circuit, and the marriage was postponed for nearly five years. His subsequent circuits were North Cave, Gainsboro’, Alford, Driffield, Scotter, Market-Weighton, Barrow, Brigg, Selby. Thence he had promised to go to Pontypridd, but this arrangement was over-ruled by Conference, and he was sent to Hastings. Then followed Oxford, St. Ives, Hull IV., (where he began) and Swansea. At St. Ives he was privileged to witness a remarkable revival of religion. For six weeks, night by night, he preached and conducted service till 10 o’clock, and many were gathered into the kingdom. In all his circuits he rendered patient plodding service, and was known as a thoughtful preacher and careful administrator.

The immediate cause of his retirement was an accident that befell him in 1891, whilst in Swansea. He located in Hull V. Circuit and for several years served its pulpits with acceptance and profit. As a class-leader at St. George’s Road, by the general oversight he gave to the affairs of that Church, he rendered valuable service at a time of transition and development. As the years passed he lost the use of his left limbs and was almost wholly confined to his room. But to the last he maintained a cheerfulness of temper, and hopefulness of outlook, that made fellowship with him an inspiration. Throughout his long and weary affliction, he was never heard to murmur. His communion with God was so real and unbroken that it sufficed for his satisfaction. To the last he prayed and thought for the welfare of Zion, and of her he delighted to talk. He wore throughout his days the white flower of a blameless life. He was indeed a living epistle read and known of all men. The reputation of the Christian religion did not suffer in his hands. He was charitable, patient, unselfish. A bruised reed he would not break. So does he leave us respected and loved by all who knew him. High posts he may not have occupied in his Church, but he might truthfully say, “I have kept the Faith”; “I have finished the work Thou gavest me to do.”

Leaving a widow and family to mourn his absence, on February 7th, 1904, he slipped his cables and put out to sea, unafraid, for he “saw his Pilot face to face.” His mortal remains rest with the dust of William Clowes, Parkinson Milson and others of precious memory in the General Cemetery, Hull.

George was born to parents Benjamin, a labourer, and Mary. Before entering the ministry he was apprenticed as a cooper (1851).

George married Ann Slingsby Spencer (abt1840-1928) in the summer of 1865 at Hull, Yorkshire. Census returns identify four of nine children.

Note: Leary gives George’s stations in 1869 as Pocklington and 1871 as Barton on Humber. This contradicts the obituary above. Birth places of the children favour the locations identified in the obituary.