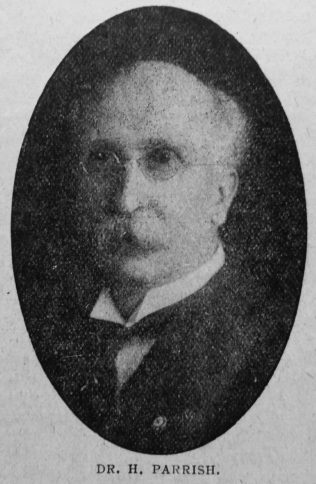 Transcription of a Sketch in the Christian Messenger by Rev. Arthur Wilkes

My experience of supers is probably unique. Instead of the invariable four-years tutelage and an extended second-preachership, l was pitchforked into the superintendency when half-way through probation, having had two supers a year each. To the first Dr. Parrish, who passed away at Philadelphia in February last – I am proud to pay a tribute of admiration and gratitude.

Henry Parrish was born at Netherton in 1848, of poor parents belonging to the Established Church. As a boy he stole away to hear John Petty, Philip Pugh and Henry Higginson at “Noah’s Ark,” as our Netherton Church was and is still called. Ecclesiastical vigilance and parental chastisements proved alike powerless to hold him to the parish church. He became a Primitive, and at sixteen preached his first sermon on “The great day of His wrath is come,” winning one convert. Apprenticed to a painter at eleven, he had little schooling, but developed an insatiable thirst for knowledge. With a shilling his father gave him for reciting Isaiah xl., he bought “Brown’s Concordance” at Dudley and ran the two miles home to devour it, and to lay the foundations of an amazing knowledge of the Scriptures. He became H.L.P. at Pontypool, entered our Canadian ministry in 1871, founded missions on Lake Simcoe and Niagara, and returned home in 1878.

It was in 1880 that I made his acquaintance. He became minister at Bromsgrove, where I was a young local, and my father Circuit steward. Naturally I saw much of him and often accompanied him to and from his appointments. What sermons he preached! I was at the hero worship stage and he became my idol, making an indelible impression on my plastic nature. He introduced me to a bigger world and enthused me with loftier ideals. After two brief years he left, but five years later a closer kinship began. In the meantime he had travelled at Stockport and Leeds. I had passed the Candidates’ Examination and the College and feverishly wondered where Conference would station me. My delectation on receiving the “Stations” may be imagined. I was down for Gloucester and Parrish was super. Monday, July 18th, 1887, is an imperishable memory. Full of misgivings as to my fitness, I arrived in the old-world city. Parrish met me with a cordial welcome to my new sphere and to his heart and home. Would that every beginner had such a super! He was a tremendous worker and would have shamed a shirker by his resistless energy. He did everything with his might and never seemed tired. But he was considerate withal and forbearing, and laid me under abiding obligation. He taught me to visit. On our daily rounds we prayed in turn in nearly every home. He little dreamt what a task it was for me, ever of a timorous temperament, to pray in his presence. I am grateful now for the discipline. And he helped me in my preaching. Arriving with a penurious stock of half-a-dozen sermons, I felt very puny beside this pulpit giant. But he became my “guide, philosopher and friend” in matters homiletic, counselling me on sermon-construction and the choice of books, and kindling an enthusiasm for Bible-character delineation, which is an enduring delight of my ministry.

His departure at the year-end caused universal regret. London claimed him, but his heart was in America, whither in 1890 he returned. Settling in the States, he joined the Baptists, but without sacrificing his cherished beliefs. Stating his doctrinal views before the Baptist Council on entering its ministry, he produced our “Consolidated Minutes,” read the “doctrines “therefrom, and said, “Those are the doctrines I professed when ordained as a Primitive Methodist Minister. Those are the doctrines I still believe and which, if admitted to your pulpits, I propose to preach.” After speaking an hour he was received “nemine contradicente.” Beginning in Philadelphia he built a “Mission” into a strong church, and then for seven years pastored the Pilgrim Church. Subsequently he ministered to the First Baptist Church, Youngstown, Ohio, liquidating a 4,000 dollar debt, establishing a branch church and resuscitating two others. By the bestowal of its D.D. degree – honoris causa – the University did itself as great an honour as it did him. It never appeared incongruous to me to say “Dr.” Parrish. He was to the manner born.

In 1897 he united the profession of physician to that of minister, following his Master’s example and realising a life-long ideal. At Leeds University, English Medical Law barred his entrance, but America gave him his opportunity. At forty-five he became a student in the Philadelphia Polyclinic. Four years later he graduated top of his form, received his M.D. and was appointed Instructor in Physiology in his alma mater. His exhaustless energy carried him through these titanic tasks while discharging full pastoral duty. Specialising on diseases of the nose, ear and throat, he became Otologist at Philadelphia Medico-Chirurgical and Laryngologist to the State of Pennsylvania, lecturing and demonstrating on this difficult department of surgical science. Only fully qualified M.D.’s were admitted to his classes, and they came from all over the States to sit at the feet of the ex-Primitive Methodist minister. Several of his lectures appeared in the American Medical Journal. Three – marvels of lucidity and research – have been reprinted and lie before me as I write – “The Third Tonsil,” “Tuberculosis of the Larynx,” and “The Relation of Diseases of the Nose and Throat to General Medical Practice.” He received the blue ribbon of the profession when elected member of the American Medical Association.

Mrs. Parrish was rarely gifted, shared his ideals, aided in their realisation. Her passing three years ago left him a broken man. The children I romped with in the Gloucester manse were their comfort and pride. Dr. Robert is Demonstrator and Prosector in the Philadelphia Medico-Chirurgical, on the staff of the Polyclinic, Supervisor of Medical School Inspection, and has a lucrative practice. Florence, after a distinguished career in Pedagogy, is happily married. She was her father’s ministering angel before the gate of death.

A note I sent to The British Weekly brought rays of sunshine into the doctor’s last days. It prompted a Black Country Local Preacher to write that he was the young man converted under his first sermon. Thus father and son in the gospel rediscovered each other after ?fty years, and a regular correspondence ensued. “Another pleasure.” Parrish wrote, “I owe to you. Rev. Thos. Sims, who went out to Canada with me, learned of my whereabouts through your article. He has just spent a week with me here. We had a royal time. We had not seen each other since our Ordination at Guelph Primitive Methodist Conference in 1875. Dr. Sims is pastor of a large Congregational church in Massachusetts.”

To the end Parrish loved England and Primitive Methodism passionately. He gave liberally to Red Cross work and wished to serve as’ Army Surgeon. His letters were full of affectionate reminiscences of our ministers and people. He cherished the hope of preaching in our pulpits again and of ending his days in the homeland. I anticipated his return with peculiar joy. Alas! how brittle are the threads that hold us to our dearest hopes. Not here shall we meet. He has gone Home. But beyond the shadows we will bridge the broken years. Till then I shall treasure his memory with deepening reverence, grateful that in the formative years of my life I felt the impress of his strong and stimulating personality, and that for five-and-thirty years I enjoyed his friendship. I count it an honour to lay this little flower on his grave. Dr. Parrish was a noble product of Primitive Methodism, and one of its great gifts to the wider world.

Henry was born in 1848 at Netherton, Worcestershire, to parents John and Martha. John was a farmer’s labourer.