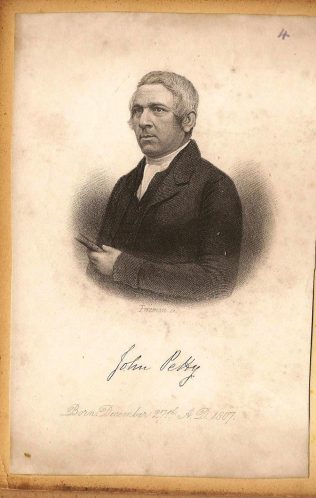 John was born on 27 December1807 at Salterforth, Yorkshire. He was first drawn to the Primitives during a mission led by Francis N Jersey. This was reinforced through listening to Thomas Batty who was given hospitality by John’s father. Their conversations shaped John Petty’s future life at the age of 15.

In 1826 the General Missionary Committee decided to continue to persevere in Pembrokeshire by sending one person. When Petty appeared before the Committee, his youthful appearance ‘excited grave misgivings’. However James Bourne had full confidence in him and he was sent arriving in Haverfordwest on 26 July 1826 to find a station with two local preachers, 11 members and one on trial. Petty persevered for two years in Pembrokeshire, the last year at his own risk when funds were withdrawn. When he left Haverfordwest was declared a circuit, although it struggled until in 1836 it was subsumed within another circuit.

Sunderland and the Channel Islands

In the early 1830’s the Sunderland Circuit undertook a mission to the Channel Islands. This venture had a set-back when the missionary, George Cosens, upset the island authorities. John Petty was sent to repair the damage and stayed for about a year, during which time his daughter Mary was born. It was even suggested that a mission be sent to Normandy in France. John Petty was one of two who learned sufficient of the French language to be able to preach in it.  The mission never came to fruition.

During his placement in Hull, John Petty was behind the building of the Jubilee, Spring Bank Chapel in 1862. It was built to seat over a thousand persons. The seating must have been fully utilised because in 1878 the Ebenezer Chapel at Spring Bank was built to provide for the overflow from the Jubilee Chapel.

In 1865, he became the first Governor of Elmfield College, York. In addition to directing the affairs of a school of 120 scholars, Petty was also commissioned by the 1865 Conference to tutor some twenty students intended for the ministry.

Key literary works were his History of the Primitive Methodist Connexion, first published in 1860, revised in 1864 and 1880. The third edition included a supplement prepared by James Macpherson. He also authored ‘Life and Labours of Thomas Batty’.

After working as a Governess in York after the death of her father, Mary married Rev Thomas Mitchell in 1871.

Thirza Maria married Rowland George Heys in 1873 in Bradford. He was a schoolteacher. By 1911 they were running a private boarding school in Scarborough. She died in 1932.

John-Petty-Article-1907 (865 KB Adobe Acrobat document, opens in a new window)
Transcription of a reminiscence that was published in the Primitive Methodist Magazine 1907.