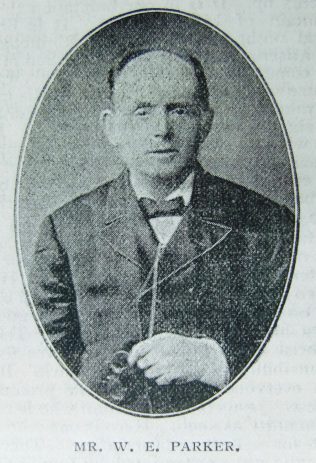 In the list of our Connexional laymen the name of Mr. W.E. Parker, of Manchester, stands high, and his claim to the place is undoubted. His Primitive Methodist pedigree, his long and loyal connection with the Church of his choice, and his influential service, rendered in so many ways, leave him in undisturbed possession. Mr. Barnabas Parker, his honoured father, was one of our first converts and best workers in connection with Old Jersey Street, and the son wisely followed in his father’s steps. In his boyhood he united with us in fellowship, and before he was out of his teens his name was on the list of our travelling preachers. Connexional Archaeologists who will turn to the Conference Minutes for 1851 will find his name upon the stations for Berwick, in 1852, 3, and 4 for Whitehaven, and in 1855 and 6 for Sunderland, but in 1857 it drops from its place among the clerics, but for reasons the most sound and honourable.

Mr. Parker, who had laboured successfully in the northern counties, had won for himself the gratitude of many and the respect of all; and there are still a few living who testify to the honour in which he was held. Owing to the failure of his health, the heavy strain of his work telling upon his constitution, he was obliged to resign the ministry and to re-enter business. His going to the North and temporary employment in our ministry was not all loss, for he was thereby introduced to the lady who afterwards became his wife, and who by her affection, fidelity, and co-operation in everything that go to make up a comfortable home and a happy and honoured life, has proved herself a true helpmeet.

In relinquishing the regular ministry for the less prominent place of a layman, he carried with him neither soreness nor sourness, but rather sadness, because of having to leave a work he loved and in which he gave promise of still greater success. His house in Ogden Street, and his later residence in Ardwick were always open to the ministers, who were sure of welcome. From that time, while he has been a sturdy champion of the laymen‘s rights, he has never disregarded the ministers’ prerogative, but in many ways proved himself their friend and helper.

Perhaps it is as a local preacher that Mr. Parker is best known, but there is scarcely one kind of work that can be mentioned in which he has not taken his share; now as a class leader, then as a Sunday school teacher, or as a temperance worker, and an active Endeavourer. Indeed, he has always had an instinct for Christian work, easily finding it, and then heartily doing it.

Now that he is no longer young, and he might very pardonably excuse himself from some of these duties, he is one of the first to obey the Master’s call. As a local preacher he is not content to have his name on the plan and to take an occasional appointment; as he did when he was younger so he does now that he is older. He prepares elaborately for his public duties, thus bringing credit to himself and edification to his hearers. This fact goes largely to explain his popularity, and accounts for his frequent appearance as an anniversary preacher.

Mr. Parker has for many years now taken an active part in the official life of the Connexion, as well in Circuit and District, and in the higher courts of our Church. And such service should not be so slightly dismissed as it often is. The man who has knowledge of men, gained by observation and experience, and is willing to place that knowledge at the service of the Church for its consolidation and extension, may do quite as much as, and sometimes more than, the man who is eloquent. The Church needs rulers as well as speakers, and in this capacity Mr. Parker has given a good account of himself during the last half-century. He is not a nominal member of the District Committee, the College Committees, the Sunday School Committee, the General Committee, upon all of which he finds a place, nor is he a silent member. His opinion and counsel are always at the call of his brethren. There are but few men who have more frequently represented Circuit and District Committees at the District meeting, and none who depend upon free election for appointment who have so often appeared as a delegate at Conference. Those qualifications that have marked him out as an official have secured his appointment on many occasions as a deputation in cases where insight, judgment and tact were essential, and these qualities are found in him in a marked degree.

Our friend cannot complain that he has been ignored, or that his service has been slighted, for on more than one or two occasions his services have been recognised by valuable testimonials and by appointments to high office. He has often been selected as principal speaker at great Conference gatherings, at the Tabernacle Missionary Meeting, and other great occasions, and the Edinburgh Conference gave him the highest honour it could bestow when it placed him in the chair of the Vice-President, an office which he filled with equal grace and ability.

For the last eighteen years, or thereabout, he has acted as the secretary to the Primitive Methodist Newspaper Company, having charge of its business department, and in that capacity has rendered a service to Primitive Methodists in all parts of the world.

Although Mr. Parker bears upon his shoulders the weight of nearly seventy years, has had the care of a considerable family, and of business, he has a comparatively youthful appearance, is still vigorous, eager as ever for Christian work. We heartily congratulate him upon his past, and hope to have the joy of companionship in service for many years.

William was baptised on 15 February 1832 at Emley, Yorkshire, although he had been born at Manchester to parents Barnabas (Barnet) Parker, a joiner, and Elizabeth Emsley.

William was Vice-President of the Conference in 1895. His obituary in the Primitive Methodist Leader identifies that on two occasions, at Middleton and Manchester XI, he undertook the circuit superintendency when the circuit was left without a minister.