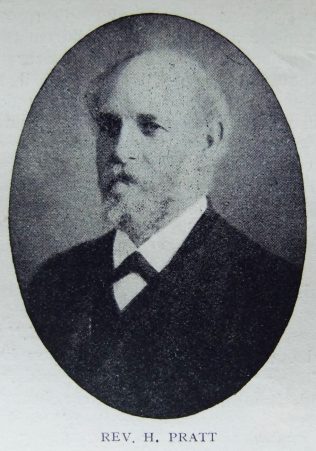 The Rev. Henry Pratt, a son of the Manse, entered the ministry in 1878, after a year’s training at the Sunderland Institute. His first station was Sunderland, and his first superintendent was the late William Graham – one of the most intellectual of a group of men who at that period were the leaders of our Church in the North. He exercised a great influence over his young colleague, who, in turn, revered his memory to the end. Here he met Miss Brack, the lady who ultimately became his wife and true help-mate in the work of the ministry. Mrs. Pratt is a daughter of the late John Brack—a family noted in Tyneside. Mr. Pratt spent the whole of his ministry in the Sunderland and Newcastle District and within a radius of twelve miles of Newcastle-on-Tyne. From Sunderland he went to South Shields. Primitive Methodist circles for their loyalty and generosity. From South Shields he went to Gateshead. During his term the Circuit was divided and he became superintendent of the Gateshead I. Circuit. It was during this period in Gateshead that the beautiful Durham Road Church and Manse were built, also the church at Felling. These remain as a lasting monument to his wise leadership and a credit to all concerned. After ten years at Gateshead he removed to Newcastle II., and then to the Newcastle III. Circuit. He returned to Gateshead II. as Superintendent, then to  Shotley Bridge, where his forty-five years of active ministerial service was brought to a close in 1923.

In addition to his work as a Circuit minister he took an active interest in the affairs of the district, filling the offices of District Building Committee secretary, and District Missionary secretary with distinction. But a bare catalogue of the Circuits on which he travelled, the churches he helped to build, and the offices he filled in the District, would give a most meagre estimate of the gracious ministry of this good and faithful servant of Jesus Christ.

There are men whose personality commands respect. Their presence creates an atmosphere in which anything flippant or vulgar is unable to live, Virtue goes out of them, and you must needs be at your best in their company. They believe the best of you and act accordingly. They trust you and expect to find you worthy of their trust. Such a personality was the late Rev. Henry Pratt. In my earlier days, when I saw him only on rare occasions, he impressed me as a saintly minister of Jesus Christ. Without in any way detracting from his ability as a preacher, and of this his record is a sufficient witness, one may boldly affirm that Henry Pratt’s character did more to commend the gospel of Christ than all the sermons he preached.

As a preacher he was distinctly evangelical. His sermons were always well prepared and delivered with passionate conviction. He was blessed with a splendid physique. His well-knit frame, finely-shaped head, and open countenance gave him a commanding presence in the pulpit. His voice was musical and pleasant, and he always spoke with deep conviction and evident sincerity.

He had just attained his jubilee as a minister, forty-five years of which were spent in active work. Five years ago he came to reside in Monkseaton. Apparently in good health, he had hopes of rendering further service in the North Shields Circuit and the District generally. These hopes were not to be fulfilled. Soon after his retirement his health broke down and he was confined to his room, with only rare intervals, during the last three years. At times his suffering was acute, but he bore it with patient resignation and Christian fortitude. It was a means of grace to visit him during his declining years. His home was a haven of peace. He was full of appreciation for the many friends who visited him, and most of all for the tender ministries of his devoted wife and their two daughters.

He entered into the “rest that remaineth to the people of God,” on Sept. 20th, 1928. All that was mortal of him was reverently laid to rest in Harton Cemetery, South Shields, on September 24th. A large and representative gathering of ministers and laymen assembled in the Glebe Church to pay their last tribute of respect to his memory. Rev. George Armstrong, a life-long friend and colleague in the ministry gave a fine address in which he eulogized the sterling qualities of mind and heart of his departed friend, and the Rev. Tom Robson offered prayer.

To God be the glory for so good and faithful a minister of Jesus Christ.

Henry was born in 1855 at Brough, Westmorland, to parents Henry Pratt and Phillis Roberts. Henry, senior, was a PM Minister.