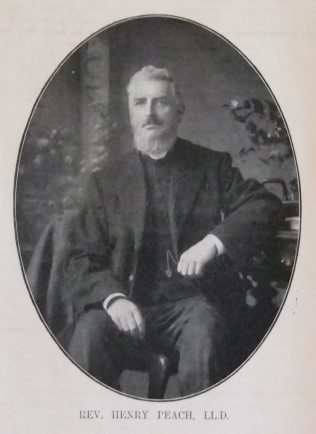 Henry was born on 8 August 1851 at Mansfield Woodhouse, Nottinghamshire to parents Henry and Ann. His father was a local preacher and earned his living as a road labourer.

Henry joined the church when aged thirteen. He was only fifteen years old when he became ‘the boy preacher’. He was placed under the tuition of Mr Joshua Rouse. Henry became a hired local preacher in the Lincoln II circuit in preparation for the ministry.

Henry became an undergraduate of Dublin University in 1880 and took his B.A. degree in 1884. He then made a conscientious study of Henrew, and Old and New Testament Criticism, almost preparing for the B.D. degree, but finding the higher D.D. was not accessible to nonconformists, he took the Law course graduating LL.B. in1889 and later in that year he achieved his LL.D. achieving the highest marks among the students.

His obituary records that on all his circuits henry had been highly respected and loved by those who knew him well. To some it was easy to discover behind a grey exterior a great heart full of sympathy and a soul full of tears.

The early Christian martyrs, or, stories of religious life in the olden time

The Vision of the Cross

Henry married Annette Slator (1850-1926) in the summer of 1875 at Holbeach, Lincolnshire. Census returns identify one child.

Henry died on 19 December 1912 at Mansfield Woodhouse, Nottinghamshire, whilst on a visit to his brother.