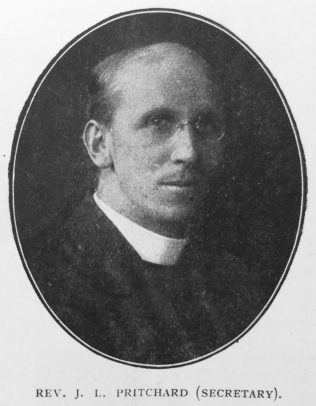 JAMES LAWTON PRITCHARD: born in Birkenhead in 1885. After a period of work in the family business, he entered the ministry in 1910. After training in Hartley College he served at Wickhambrook, Redditch, Witney, Sheffield (Attercliffe) Leicester IV, Alfreton, Skelmersdale, The Hartlepools, North Walsham, Frome. In 1956 he retired to Wrexham and moved with his daughter and son-in law to Dumfries in the Carlisle Circuit in 1965.

Throughout his ministry he was able to draw upon his early business training which proved a valuable asset. He was especially known as a minister who was devoted to his people and their needs and concerns. His carefully prepared sermons were long remembered by his hearers, the wit and humour with which he enlivened business meetings were also greatly appreciated, and, as he moved on, he left behind an increasing number of friends who had been enriched by his ministry and friendship. In retirement he continued preaching and sharing in the activities of the Dumfries Church until he became ill. He knew the serious nature of his illness and he faced it with the courage and cheerfulness which had marked his life and ministry, thus supporting and cheering his family and those who visited him.

James was born on 6 April 1885 at Birkenhead, Cheshire, to parents William Pitt Pritchard, a baker & shopkeeper (1901) and insurance agent (1911), and Sarah Lawton. His brother Edward was also a PM minister.

He married Daisy Alberta Hurrell, nee Rolls (1882-1941) in the summer of 1920 in the Yarmouth Registration District, Norfolk. Birth records identify one child.