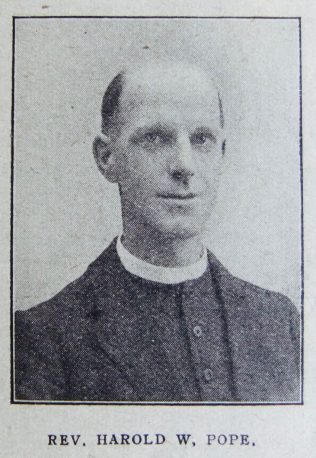 Mr. Pope is one of the many friends we have made since coming to London. We have been privileged to be his guest, and have seen at close quarters the value of the work he has done for our Church. He was born at Maidstone, Kent, on July 7th, 1880. His parents were members of our Church at Brewer Street. They removed, however, to Strood when Harold was less than a year old. There was no Primitive Methodist society in Strood so his parents joined the Wesleyan Church. He was converted when fifteen years of age, and began to preach two years later. He had been drawn into Primitive Methodism at Chatham, though the chapel was three miles from his home. Our Church at Chatham was under the able and evangelistic guidance of the late Rev. William Wardle and Mr. Pope acknowledges the immeasurable debt he owes to Mrs. Wardle, whose Society Class he regarded as an ideal institution for conserving the church’s young people. He had served his apprenticeship as a pupil teacher, but was recommended by our Chatham Church for the ministry, and educated at Hartley College.

The whole of his probation was spent at High Wycombe, and here he found his wife, who is the second daughter of the late Mr. William Lee. He was the second minister at Andover, and in the third year on the ground became the Superintendent of the new Hurstbourne Circuit, which was formed from Andover. After four years, in 1912, he removed to Chipping Norton for a three years’ term. Then he became second minister at Brinkworth. He was only allowed to stay here two years, for in 1917, when attending the London Conference as G.C.D., he was appointed to superintend Swindon I, the third largest circuit in the South of England.

At Swindon the whole of the Trust debts, over £1,700, were wiped out in ten months, and in his last year the ordinary income for missions exceeded £200. During his term at Swindon, he prepared seven local preachers for the plan, and one of his last services was their ordination. At Faringdon, where he is now stationed, there are only two hundred members, but he is seeking to establish it as an entirely independent circuit. This is his thirteenth year in the famous Brinkworth District, and quite fittingly he is District Missionary Secretary. In all his labours he is splendidly supported and encouraged by his devoted wife. Together they serve in their home and in the churches inspired by the loftiest aims and diffusing everywhere the purest influences.

HAROLD WILLIAM POPE: born in Maidstone in 1880. After training at Hartley College he entered the ministry of the Primitive Methodist Church and began his work in the High Wycombe circuit in 1904. Then followed a long and fruitful ministry in different parts of the country. In all his circuits (which included Andover, Chipping Norton, Brinkworth, Swindon, Faringdon, Rockland, Driffield, Bingley, Aldershot, Basingstoke, Hornsea, Martham and Bradwell), he is remembered for his lively and vigorous preaching, his great administrative ability and above all for his faithful care of his people. His pastoral gifts were many an were exercised with such warmth and sympathy, that people in trouble, both within and outside the church, found him a tower of strength. When he retired in 1948 his zeal and devotion led him to accept appointments as an Active Supernumerary Minister in several circuits, and with undiminished energy and unimpaired ability he continued his faithful work. In 1957 he and Mrs. Pope moved to Canterbury, where he still continued his preaching and pastoral work. He regularly led Society Classes and remained active and alert to the very end of his life. The day before he died he attended a Ministers’ Meeting where, characteristically, his chief thought was for a brother minister who was seriously ill. The following day without warning, he was taken ill and died at once, on 14 December 1963, in the eighty-fourth year of his age and the sixtieth of his ministry.

Harold was born on 7 July 1880 at Maidstone, Kent, to parents Albert and Ann. Albert was an oilman and general dealer (1891).