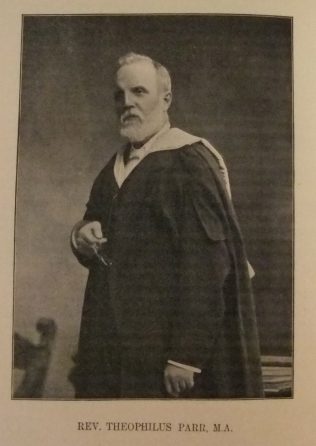 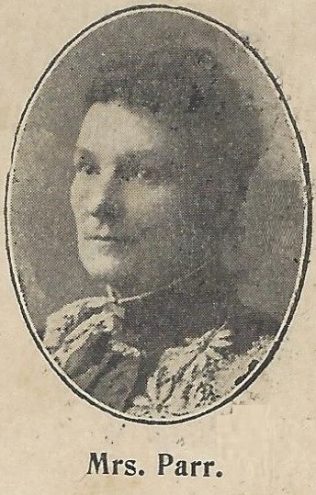 Theophilus was born in March 1849 at Bishops Castle to parents Thomas Parr and Matilda Bayley. His father, Thomas, was a PM Minister.

Theophilus began to serve the Church by the time he was ten. His father apparently made for him a little sermon, which he would recite for those who gathered from far and near to hear him.

Whilst his parents resided at Bloxwich, Theophilus gained entrance to Walsall Grammar School. In attending he walked four miles per day each way. He was converted whilst he was attending the school. At that time his parents had moved to a different circuit and he was staying in the care of a Mrs Heath of Brownhills.

After leaving school, Theophilus found a position in the office of an estate agent in Birkenhead, Cheshire. He threw himself into the work of the Church in Sunday school and later on the preachers’ plan. In 1868, he was called into the ministry by the Chester circuit as a hired local preacher.

Theophilus served on both the Probationers’ and College Examining Committees. On the former he was the co-examiner in Hebrew.

Theophilus was blessed with a wiry, vigorous constitution, which had to withstand African fever, Australian heat and English winter cold. While in Africa, he spent thirteen months alone in the bush, his wife having to be ordered home twice during his two-year stay. His diaries reveal that his work in Africa among the Bubis included; road-making, visiting, doctoring, acquiring the language, printing, teaching, and preaching. His work on the language was notable. He reduced the language to a grammatical form and complied a dictionary that was invaluable to those who followed him.

On resuming work back in Britain, Theophilus went to Edinburgh where he also obtained his B.A. degree.

Theophilus was President of the New South Wales Conference in 1895. Whilst in Australia, He served on the Committee which framed the constitution of the United Methodist Church of Australia.

Although he served on Committees and had excellent business and organising capacity, he was primarily an evangelist.