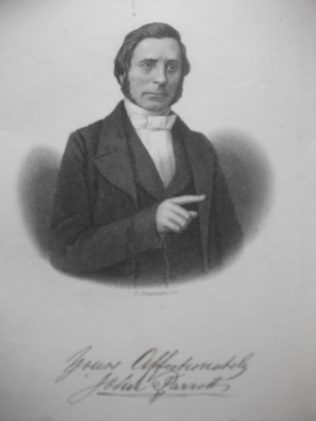 He was converted at the camp-lovefeast in June 1817 which had been organised by a senior namesake local preacher. This was the meeting to which John Wedgwood was summonsed to Nottinghamshire before he was imprisoned at Grantham.

Cockermouth was missioned by John Parrott in 1834. He preached in the Market Place, and subsequently a camp meeting was held on Papcastle Common by the Carlisle preachers, and the lovefeast was held in the old Theatre, at the Sun Barn. There is a minute in the Carlisle records of September, 1835, authorising the taking of a room at Cockermouth, and it is presumed to be the rented room in St. Helen s Street, which was the meeting place for some years, after which a room was taken at Vinegar Hill. When the Wesleyans vacated High Sand Lane Chapel, the Primitives rented it, ultimately buying it. For almost fifty years they remained in this old sanctuary, in a yard, down a lane.

Petty comments on favourable progress being made in the Bedford mission during the time John was Superintendent, 1848-56, after a number of difficult years when the mission had been ‘stationary’. Chapels were built at Oakley and Colmworth and the Bedford chapel was rebuilt on a greatly enlarged scale.

Kendall writes; ‘ John Parrott was clever ; but his litigious propensities marred his usefulness, and sometimes were the occasion of trouble, both to himself and to others.’

A digest of the History, Polity, and Doctrines of the Primitive Methodists, 1864

The 1871 census shows John lodging in Peterborough, described as a dissenting minister. His wife is with her mother in Durham and is described as a Primitive Methodist Ministers wife.

John died in 1873 in Peterborough, Cambridgeshire.

J Petty, The History of the Primitive Methodist Connexion, 1880, p417