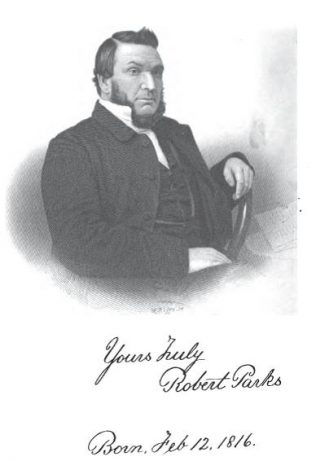 Robert was born on 12 February 1816 at Barkstone, Leicestershire to parents Henry and Mary. He was baptised on 10 March 1816 at Barkstone. His father was a Wesleyan. Between the ages of 7 and 10, Robert attended the ‘Free School’. As a young man, as well as attending Wesleyan meetings, he heard several PM preachers including John Wedgwood. He was converted in 1834 under the ministry of Abraham Worsnop and went ‘on the plan’ in March 1835.

To assist in the extensive missionary labours undertaken by the Branch, Robert Parks a convert during a recent revival at Barkstone, his native village began his missionary labours, July 1835. His first day’s work was to mission Barrowby near Grantham, and Wolsthorpe near Belvoir. Robert Parks became one of the best-known ministers in the old Nottingham District. He had a clear voice, an imposing presence, and was an evangelical and popular preacher and platform speaker. “We see him now at the start of his ministry ” enduring hardness; ” for while in this district he met with a good deal of persecution, travelled long journeys, and preached scores of sermons in the open air.

Bottesford and Grantham owed much to Abraham Worsnop and Robert Parks. They were well mated; for the people in their own homely fashion used to say of them : ” Parks shoots the birds, and Worsnop comes along and picks them up, so that between them and the Lord they make a good bag.” God’s blessing was on hard work. Fresh places were missioned, such as South Sutton, hitherto ” destitute of the ministry of reconciliation,” and where they were discharged from their regular preaching-house, and had another immediately offered them. At Knipton, too, three miles from Belvoir, they preached three years in the open air before they could obtain a preaching-place.

It is recorded that in his ministry he preached 10,297 sermons, 1252 of these at anniversary occasions. His obituary records; ‘He was an able, laborious and successful minister; an eloquent, impressive and popular speaker, a diligent, sympathising and faithful pastor, a large hearted and generous friend.’