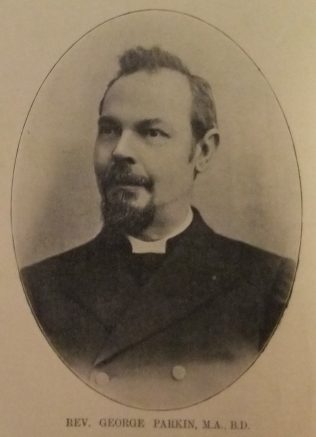 George was born in 1846 at Eston, nr Middlesborough, Yorkshire to parents Jonathan Parkin and Rachel Hollingsworth. Jonathan was an iron stone miner (1861).

George was converted at the age of ten.

George spent the first ten years of his ministry on the Scottish Missions. While in Glasgow, he availed himself of attending the University classes and graduated in Arts, obtaining his M.A. degree in 1874. He also received a Divinity Degree from the same university.

When he became College Principle (1898-1903), George also undertook the role of Hebrew tutor.

George was President of Conference in 1906.

His obituary records that George was extremely successful as a circuit minister. He retired in 1914, and for a time helped in the Manchester VI circuit, chiefly at Withington, where he lived.