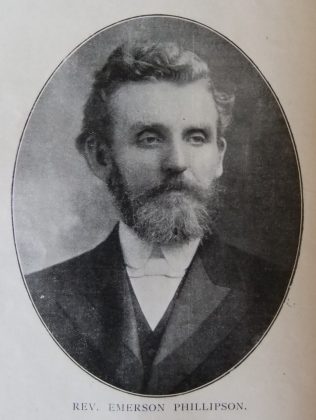 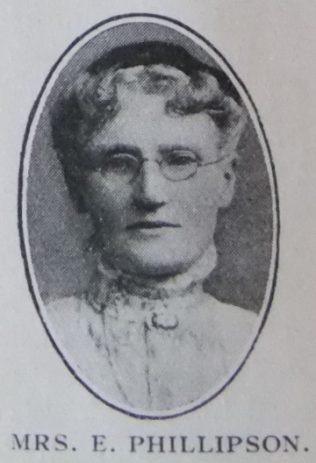 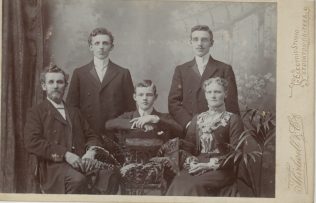 zoom
Rev. Emerson Phillipson and his wife Elizabeth sitting on either side of their three sons: reading left to right they are John Albert William, George Emerson and Joseph Wilfrid Featherstone
Supplied by Judith Rogers

Emerson was born on 30 May 1850 at Stanhope in Weardale, Co Durham to parents Featherstone and Jane. Featherstone was a lead ore miner. Emerson was baptised on 4 November 1850 at High House, Stanhope, Co Durham. His brother John was also a PM Minister.

Emerson’s early years were spent in Canada and USA. Returning to England the family became attached to the Primitive Methodist Society at Wearhead. Emerson was converted when a revival of religion swept through Weardale in 1868. A year later, Emerson began to preach.

Emerson worked as a lead miner before entering the ministry.

Whilst in his first appointment at Glasgow, Emerson was able to continue his education as a student on the Free Church College and within the University.

Whilst on the Stockton station, new churches were built at Thornaby, Yarm, Victoria Avenue, and Eaglescliffe Junction. A chapel was purchased at High Leven. Manses were secured, an organ installed at Bousfield Lane Church, and a caretaker’s house erected. Total expenditure was £11,000 of which some £9,000 was raised. Some eighty new members were added to the roll. Emerson earned the name of “Chapel Builder” during his ministry.

His obituary records that Emerson was a passionate Evangelical. He affirmed the Saviourhood of Jesus, salvation by faith, the Witness of the Spirit, and the joy of perfect love.

Emerson served as Secretary of the Building Committee in the Darlington and Stockton District and as District Meeting Secretary in the Sunderland and Newcastle District.

Emerson became a director of the Connexional Insurance Company and of the Chapel Aid Association.