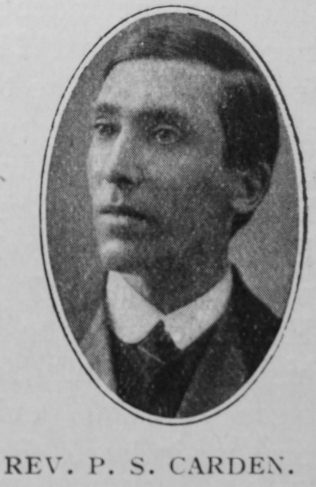 PERCY SAMUEL CARDEN: born at Northampton in 1880, son of Rev. Henry Carden, was educated at Deacon’s School, Peterborough, and Bourne College, Birmingham;  he entered the ministry in 1900, after two years in Hartley College, Manchester. His fifty-two years of active ministry were spent at Portsmouth, Whitehaven, Sutton and Kirby, Crook (twice), Stockton-on-Tees, Norwich, Eston, Stanley, Ashington, and Sunderland. He was for seven years the Chairman of the Sunderland and Durham District, and during that period the Durham County Methodist Big Meeting was initiated; it was appropriate that his enthusiastic and wise leadership was recognised by an invitation to preach in Durham Cathedral.

His strong views, especially on pacifism, were put forward boldly, yet always kindly, a fact that accounted for the love in which he was held by so many whose views were opposed to his own. He was an able debater and he knew how to hold the attention of Conference when he spoke from the tribune. he possessed a quiet humour, which in all his dealings enabled him to keep a balanced judgement. he was a good friend, and many younger ministers are in his debt because of his encouragement, wise counsel and faith. As a preacher he was arresting, for he knew what he believed, and he made a special appeal to men. In his pastoral work he was painstaking and diligent, revealing no mean gifts as an administrator.

He was a keen sportsman, having played football, cricket, and golf; on the history of cricket he was an authority. In his short retirement he was happy to spend his time with his books and writing articles for papers and magazines. He died peacefully on 3rd March 1955, in the fifty-fifth year of his ministry and the seventy-fifth of his age.

Percy was born on 10 March 1880 at Northampton, to parents Henry Carden, a PM minister, and Eliza Jane Shadick.