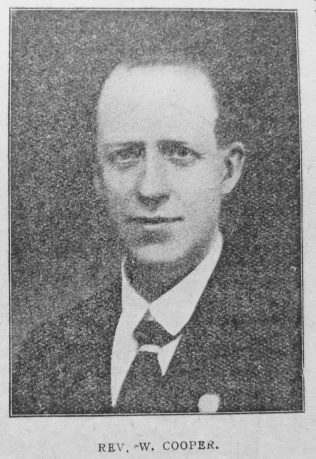 Transcription of Sketch in the Christian messenger by J.G. Bowran

We remember Higher Ardwick Church from our College and Probationary days. The Rev. James Watkin was then exercising his influential ministry in Manchester. We remember the band of officials and people who carried on an aggressive evangelistic work. Many faithful ministries have been exercised there since, and we are all delighted at the success attending the present superintendent’s ministry.

The Rev. William Cooper was born in Swaledale, forty-five years ago. His parents, removed into Lancashire when William was seven years of age. When only ten years our friend was a half-timer in the factory, three years later he became a full timer and earned good wages. In the town of Nelson, whither they had removed, he was converted when a youth of seventeen, and at nineteen became a local preacher with Mr. T. Werrett, to whom he owes an immeasurable debt. The Rev. J. T. Barkby gave him great help in his studies, and Mr. Cooper cherishes the highest esteem for our Missionary Secretary. For eight years he was a teacher of the infant class in the Sunday School.

When twenty years of age he entered Hartley College, and had three profitable years there. His first station was Chorley, where he served his probationary years, and a fifth year as an approved list preacher. He then married and went to Blackburn and has since laboured on Liverpool III, Warrington and Leigh. Our readers will recall the accident which robbed our friend of his wife after twelve years of domestic felicity. We are glad to know that our brother has been graciously sustained and comforted and that he has found everywhere the truest and most uplifting sympathy. He has brought the whole force of his personality to bear on his work on Manchester IV Circuit.

For him it is a truly congenial sphere. He preaches without notes and has a special service for young people. He attends Sunday School twice on a Sunday. Each Sunday morning he gives an address to the children and lately has done the same in the evening on account of the large numbers of boys and girls who attend. He is seeing the best success. Quite recently he witnessed sixty-nine decisions of the young people for Christ. There are many who rejoice in his success. It is a great thing that Higher Ardwick is a soul saving centre. We are delighted to write about him, and anticipate his future with great hope and confidence.

WILLIAM COOPER: born at Muker in Yorkshire in 1874, and trained at Hartley College, he toiled unsparingly for twenty-two years in Lancashire, laboured heroically for five years in the exhausting climate of Fernando Po, brought back to England a broken body but an unconquerable spirit, and gave to Cornish Methodism his last six years of strenuous devotion. He was self-forgetful and chivalrous. He rebuked evil without fear or favour, bore unfaltering witness to the faith that was in him, undertook the hard tasks in the service of his King, and made a frail body do the bidding of a consecrated will. He was generous to a fault, compassionate, sympathetic, understanding, and loyal in friendship, importunate and passionate in his pleadings with souls. His love of Christ and men allowed him no rest. He burned himself out willingly and died in holy triumph on December 5, 1935.

William was born in 1874 to parents James and Alice. James was a farmer in Yorkshire, but on moving to Lancashire became a grocer.