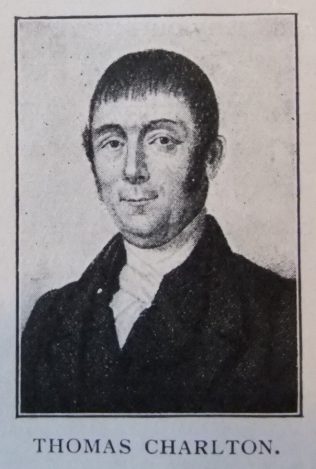 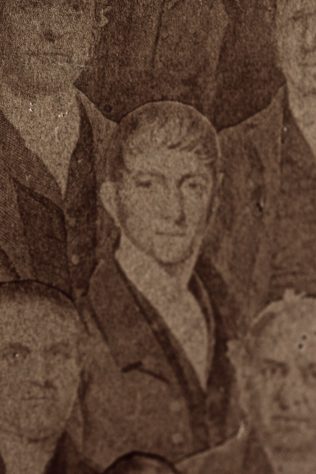 The Rev. Thomas Charlton was born at Shelford, near Nottingham in August, 1796. His father’s days were spent in sin and vanity, and he indulged in the ordinary vices of the world; he neglected the education and also the maintenance of his family. Happily, the mother was a pious consistent Christian, and as a consequence, she urged upon her children the necessity and importance of attending the house of God and of obeying the truth as it is in Jesus. But circumstances compelled her to send them to work for a livelihood, when they ought to have been at school, but she did her best to teach them to read, and in her son Thomas the disposition for learning grew, and he often regretted that he never had the privilege of attending even a Sabbath School. When he became a young man he felt deeply the want of a better education, and in a praise-worthy manner he applied himself to the work of self-tuition, and encouragingly succeeded. In this work his spare moments were spent and his little overplus money was expended in purchasing suitable books which he read and studied  and besides, he had the assistance of some of the first of our ministers who visited Shelford, and who were very kind to him, in lending him books, and they also endeavoured to impress upon his mind the doctrine of a free, full and present salvation.

The first visit of the Primitive Methodists to Shelford took place in the year 1814, when Mrs. Charlton at once became a member, and henceforth adorned her profession by a holy life, and endeavoured to bring her children under the influence of that preaching which had been made a blessing to her soul. In the year 1818, brother Charlton, was led to see himself a great sinner in the sight of God. The great truths of the Gospel which had been taught him, enlightened his mind and softened hls heart, and induced him to inquire,
“What must I do to be saved?”
And by trusting alone in Christ for pardon and eternal life he was constralned to say: “I am saved.” He soon identified himself with the society espoused by his mother, and considerably interested himself in its prosperity. About this time the little cause at Shelford met with persecution, persons were turned out of their houses for receiving the preachers and allowing them to preach therein. Two families in particular had their furniture thrown into the road, and for some time it was left by the way-side. But this did not damp their zeal, several times by the unhoused furniture the society met for prayer an praise and felt indeed that God was there. At one of these gatherings the subject of this sketch for the first time addressed a congregation in the name of the Lord. This was highly distasteful to his master, who threatened to dismiss him from his service, should he pursue such a course of life. This threat was very painful to his mind, especially as his mother was now partly dependent on him for support. Nevertheless, he felt it to be his duty to maintain his ground and leave results to the Disposer of all events. Moreover his mother urged upon him the duty of obeying God rather than man. This was decisive; he determined at once what course to take; he went to the place of meeting and poured out his complaint before God, and took firm hold of his supporting hand. That night he was requested by the friends to give an exhortation, which he did, and three or four persons professed to find peace through believing. This greatly encouraged him in the midst of his trials. He was subsequently put on the preachers’ plan, when he threw his whole soul into the work, and was led to say, “To him my more than all is due.”

He travelled hundreds of miles to supply his appointments, and would not wilfully neglect them for any consideration. The work with him was too sacred and important to be trifled with, he felt the value of precious souls and laboured in the name of Christ to save them from eternal death. In 1821 he was called into the regular ministry; he commenced his labours, October 1st., in the Home Branch of the Nottingham circuit. This station then included, what now forms five separate circuits. He afterwards travelled at Norwich (then a branch of the Nottingham circuit), Boston, Cambridge,  Ashby-de-la-Zouch, Leicester, Newcastle, Darlington, Ripon, Brompton,  Keighley, New Mills, Stockport,  Preston, Liverpool, Bradwell, Manchester, Chesterfield, Burton upon trent, Norwich, Upwell, Ipswich, E. Dereham, Aylsham, North Walsham and Docking circuits. On these stations his labours were considerable, and notwithstanding the many trials incident to an itinerating minister’s life, he was made a blessing to many souls.

While on the Cambridge station, he became acquainted with her whom he afterwards made his wife, and who in every respect was a helpmeet for him. This union took place in March 1826, the result of which was eleven children, seven of whom are still alive to mourn their loss. While travelling on the Ipswich circuit he was waylaid and robbed, when returning home from one of his appointments; the ruffians cut open his head, and knelt upon his chest while pilfering his pockets, and inflicted an injury upon him from which he never fully recovered. After this savage attack was made upon him he always complained that his memory was not so retentive, and also of great pressure on the chest; in fact it shook his whole nervous system and he was never again the same man. One of the family says, “I never remember hearing my father complain of weariness and faintness until this happened, after which he frequently did, especially after a hard day’s work at a camp meeting.” Here also he had an attack of ague and rheumatic fever, and on the North Walsham station he suffered considerably from the same complaint, which brought him very low, so much so that his medical attendant said, “It will be impossible for him ever to resume his work again as a preacher.” But by the blessing of God he rallied again, and his son William says, “I shall never forget the letter he wrote me. When he got into his regular work again, his heart was in it and he could not be happy out of it.” Truly he felt it to be, all his business here below to cry, “Behold the Lamb.” But on this circuit he began to feel that another disease had made inroads upon his constitution. The accumulation of a few grains of sand in his system at times made life almost intolerable and ultimately brought his useful career to a close. He was superannuated in 1862, while on the Docking circuit. and where he met with great kindness from the friends. He remained with them twelve months after, and then returned to North Walsham, where he finished his days in peace on Nov. 25th, 1866, aged seventy years.

As a preacher he was generally acceptable, his sermons were well studied, methodically arranged, beyond mediocrity, and their delivery was characterised by great earnestness, which indicated that he felt deeply the importance of his work. He was also a great theological reader; he waded through the following commentaries, viz., Adam Clarke’ s, Henry and Scott’s, and Whitby’s, beside others of a kindred character, and periodicals of various descriptions, so that he was well informed and prepared to converse upon many important topics both of a religious and a political kind. It was truly astonishing how he read through so many works, considering the amount of labour done by him on the stations to which he was appointed. But he paid attention to early rising and thus secured to himself many hours in the week for reading, study and prayer. Family visiting, in which he did not excel, was hard work to him; especially at the commencement of his ministerial career; he has been known to stand at a door for some time before he could muster courage to knock for admittance, and sometimes he returned without making the required visit. But to some extent he mastered this diffidence, and in this very necessary and important work he was made a blessing.

I may here add that brother Charlton was truly attached to the society of his choice; he loved its doctrines and its discipline. As a husband he was devoted and affectionate. As a father he was indulgent and kind. And if faith in the Saviour, devotedness to his cause, and a consistent deportment are the characteristics of a Christian, then our departed brother was one. He lived the life of the righteous and died their death. May my last end be like his is the prayer of E. HOWCHIN.

Thomas was baptised on 28 July 1796 at Shelford, Nottinghamshire. His parents were Richard and Ann.