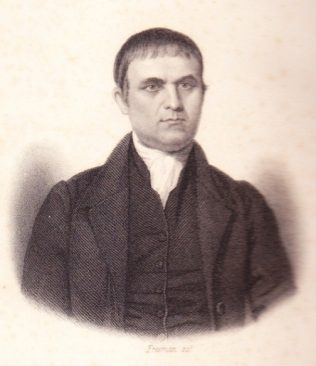 The Primitive Methodist travelling preacher Samuel Chapman was born in Heckington near Boston in Lincolnshire on 6 March 1798.  He received no formal education and at the time of his marriage to Sarah Wilkinson in June 1828 he was unable to read or write.  Later, he mastered his alphabet and slowly learned to read and write although his obituary stated that ‘his intellectual attainments were basic.’

On entering the ministry 1823, he first served in the Nottingham Circuit and is officially listed as appointed to the huge Norwich Circuit, his only East Anglian stationing, in the following year.  However the Norwich Circuit account book records him already amongst the ministers in March 1823, one of three ministers serving in Norwich.  His name disappears from the list of ministers after the June quarter, but reappears in March 1824 just for that single quarter.  For each quarter he spent in Norwich, he received £4 in wages as well as a further payment each quarter of 6/6d for a child.

In March 1824, he travelled to Colchester, then within the Norwich Circuit and registered a Primitive Methodist place of worship in a converted house in Magdalen Street.  The following year it had 19 members and a minister was stationed there.

He missioned new places, often sleeping beneath hay stacks or under hedges on his journeys.  Once he was so long without food except what he was able to gather from the hedges, he picked up and ate the remains of a turnip he found in the road.  His conscience would not allow him to take a turnip from a field without the express permission from the farmer so he made do with the discarded vegetable. At Tadcaster where he and his family were allocated a miserable hovel for a home, he felt it was such an improvement on the conditions in which he had often found himself thathe had no complaints about the wretched accommodation.

Towards the end of his life, he set up in business as a stationer in order to eke out his scanty ministerial allowance to accommodate the needs of his family, but his failing health forced him to give it up.  In transferring the business to his successor, he was so much trusted by others that his own valuation of his stock and fittings was accepted by the purchaser without question and no independent valuer was needed.  He was so well respected that one gentleman gave him £50 to help with his difficulties and the medical adviser who attended him refused any payment.

To his sorrow, some of his children were not interested in religion.

He died on 22 February 1867 after ‘stroke after stroke rendered him more and more helpless.’[1] Several ministers contributed to his obituary in the Primitive Methodist Magazine for that year.  He was described as having ‘not much pulpit talent’ yet his preaching was ‘practical and expository, edifying and instructive.’  He showed ‘good common sense’ and was a ‘plain, hard-working, devoted minister of the Gospel.’

See also Samuel Chapman for information about his family and circuits.