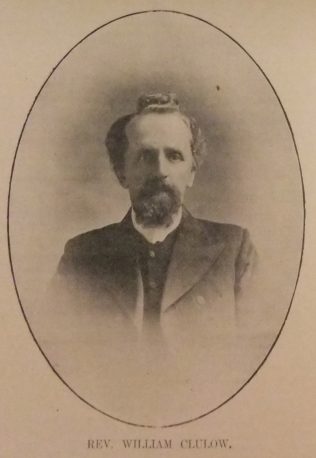 William was born on 29 August 1843 at Leek, Staffordshire to parents James and Mary. James was for many years a very acceptable local preacher. James worked as a rural post messenger at the time of the 1861 census.

William was converted at the age of fifteen and became a member of the Wesleyan Church. Two years later, and without his knowledge, his name appeared on the plan as an exhorter. After four years as a local preacher, circumstances led him to join the Primitive Methodist Society at Leek.

He had shrunk from the responsibility of the ministry feeling he had little education, but on being pressed, and in answer to prayer, on 31 December 1867 he presented himself before the examiners, one of them being Thomas Bateman (that year the President of Conference), and within three weeks he commenced his ministry in Cheltenham.

William was an extempore preacher of no mean order, and was always listened to with great attention and interest. His discourses were models of logical arrangement, saturated with theology, deep in thought, convincing in argument and full of force and fire.

In politics, William was a staunch Liberal; he was a thorough going Temperance advocate and an anti-tobacconist to boot.

William died on 20 June 1929 at Bradford, Yorkshire. He was interred at Wolverhampton Cemetery, Staffordshire.