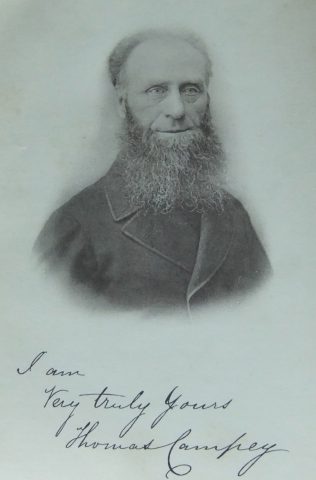 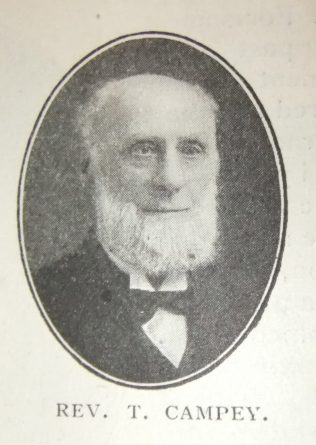 Thomas was born on 4 June 1838 at Colton, nr York, Yorkshire to parents Joseph and Sarah. Joseph was a farm labourer.

When he was young, the family moved to Hemingborough, nr Selby. Thomas attended the Anglican Sunday School and was baptised and confirmed in the established church. When aged 14, Thomas was apprenticed at Ryther, nr Tadcaster. He was converted aged 16 at a lovefeast held at a Wesleyan chapel. He soon joined the Primitive Methodists at Cawood in the Tadcaster circuit.

In June 1858, Thomas’ name went on the plan without his knowledge and to his great dismay. Appointments were numerous and involved long journeys. He studied early in the morning and late at night.

Thomas was called in October 1859 to supply for John Tudsbury, who had died soon after being appointed to Tadcaster. He declined firmly, however, the call was repeated and on 6 June 1860 he went to Selby.

The 1890 biography records that Thomas was not a classical scholar but had some acquaintance with Hebrew and Greek.

Thomas had a real gift for journalism and for 50 years reported on connexional and district proceedings, not only for Primitive Methodist journals, but for newspapers such as the Sheffield Telegraph and Sheffield Independent.

Thomas was a Deed Poll member of Conference from 1918 to 1928. In all, he attended a total of 55 Primitive Methodist Conferences.

His obituary records that he was a preacher of direct and convincing power, scriptural and evangelistic to a marked degree.

Thomas died on 6 May 1929 at Sheffield, Yorkshire.