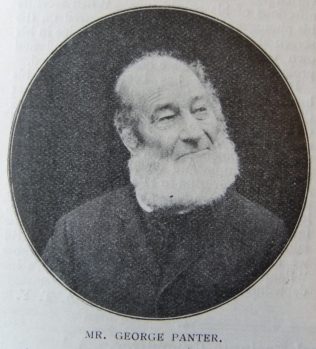 The day in which “every man’s work is made manifest” will undoubtedly be one of great surprises. In its unerring and glorious light forgotten names will spring into prominence. The obscure worker will stand revealed, rewarded, crowned. Reality alone will abide, and all true worth will be recognised. The rejoicing of the faithful is certain.

Such is the hope afforded by Scripture to all who “patiently endure as seeing Him who is invisible.” Infinite love involves unfailing justice. Every man shall as the last come to his own. Behind human life stands God, and He will do right. Fidelity to Him and His service must receive His “Well done!” And whilst it is not for every man to “spread his fame abroad,” it is for every one to be true to the best he knows. Among the number of those who are, must be counted Brother George Panter, of Gamlingay. For more than fifty years he has followed with unswerving loyalty the Master he loves and unreservedly given wealth of heart and brain and pocket to the Church of his choice.

Our friend is a product of village Methodism. He was converted in a meeting conducted by our preachers in the old West Farm barn, at Oakley, Beds, in the days when every preacher was an evangelist and all members “praying labourers.” To that time, when the place was crowded and the power and grace of God so abundantly manifested that preacher and people shouted together for very joy, he looks back with reverential love and excusable pride. It was the morning of his Christian life and it was all so wondrously real. The reign of sin in him was overthrown, his salvation was certain, his hold on truth secure. Christ had taken possession of his heart and filled his life. He was drawn into the company of BELIEVERS – men and women “filled with the Spirit,” among whom “signs and wonders marked the hour.” It is no wonder that his whole Christian life has been characterised with evangelistic fervour, and he may well be pardoned if his eye grows bright with fragrant memories and he sometimes sighs for a repetition of the olden days.

Brother Panter was not allowed to remain idle, as he gave evidence of usefulness and was early “put on the plan.” In this he heard a Divine command and has held every appointment sacred. Long distances and short he has trudged in cold and heat and storm and calm, gladly spending and being spent in a great service. “Eight Sundays in the quarter,” he says, “that was just nice. It kept us in touch with things. And journeys were long then – fifteen miles out and the same back, and no bicycles. But we used to go, aye, and we used to get back; although not always on the same day we went.” Always dependable he was sure of his congregations, and to see and hear – the stalwart form with head firmly poised, the deep rich baritone voice, the uncontrollable humour and ready speech, the easy expression, the burning earnestness of soul and intense spirituality in every word – this was to learn why every pulpit in his Circuit was open to him, and his services eagerly sought by sister Churches. Even to-day, with the weight of his years heavily upon him, his appointments are occasions of joy and great expectations to the congregations “having him,” while his efforts tell how strenuous and gracious his ministrations must have been.

He is more than a preacher, however. All along he has been a most energetic worker. Sunday-going religion could never satisfy him. His nature is too ardent, too eager, to great for that. He has always been a firm believer in the week-night services of all kinds. The more of them the better for him. The week-night preaching service was always a coveted means of grace, and his presence must have cheered and helped many a preacher. Something was wrong if “Panter” was absent. The class-meeting also has been a source of delight and a means of service. To him it is a real living thing, a kind of “necessity for Methodists.” He believes in its mutual helpfulness and for years has been a zestful leader, giving the best of his thought, and guarding the interests of its members with jealous care. The prayer-meeting, too, has been very dear to him. He regards it as a kind of spiritual armoury in which men are equipped for battle and for service. He thinks the man who prays most has the best chance of being good, and the Church earnest in prayer will be great in spiritual deeds. Any apparent lack of interest in these things is a grief to him. He is also enthusiastic in the work of the Sunday-school, attending it Sabbath by Sabbath with commendable punctuality and assiduity. He holds to-day, as for many years, the offices of class-leader, society steward, school superintendent, trustees’ treasurer, and assistant Circuit steward, beside that of local preacher, and in them all displays a thoroughness worthy of imitation. It was no little joy to him to see his chapel last year thoroughly renovated and reseated in harmony with modern tastes and needs and all paid for on completion of the work. He rejoices that he will leave the building better than he found it.

“Panter” – as he is familiarly called – has interests beyond his immediate Church and Circuit. If interest in the wider sphere counts he is a “Connexional man.” His circumstances have prevented him from becoming widely known to the Connexion; but they have not prevented him from knowing about the Connexion. Go into his cottage home any day you will and the Primitive Methodist newspaper will be readily seen. He devours its pages and delights in its contents. He is in sympathy with every good work and rejoiced by all the news of progress and success. His interest in Primitive Methodism is universal. Its interests – North, East, West, South – are his. He cannot understand how anyone can be “satisfied with only knowing just about his own society.” A Primitive Methodist home is, to him, incomplete without a Connexional magazine and a Connexional newspaper. Perhaps it is because of his wide interest as well as faith in him personally that his Circuit has twice sent him as delegate to District meeting, and his District as delegate to Conference.

His is honoured in “his own country.” The older folk admire him for what he has been and love him still. The younger ones look up to him as a model of goodness and manliness. Inside his Church and outside he is everywhere respected. Nor is this to be wondered at. More than half a century of upright, noble Christian life must tell. In a racy, glowing speech a short time ago he told us how he had four jubilees – that of age, of marriage, of conversion, of local preaching – and was just completing fifty years of total abstinence. This with the consistency and grandeur of life involved has won for him a lasting place in the affections of his neighbours. When recently his photograph unexpectedly appeared on the screen at the close of a Lantern Service in his own village the applause was so loud and prolonged that the slide had to be removed.

Brother Panter has been blessed in his home. His wife has been a real helpmeet through all the long years. Their home has been ever open to the preachers, ministerial and ley. They have a welcome still. He has the joy of knowing two of his sons are following his example and devoting their lives to Jesus and their gifts to His Church. And now as the twilight gathers about him and his beloved wife, one can only pray it may be golden, fading away, in the Lord’s good time, in the sunlight of an eternal morning. Not till we are all brought there we shall know “Panter’s” real worth and our Church’s indebtedness to him.

George was baptised on 12 June 1831 at Oakley, Bedfordshire. His parents were James and Sarah Panter. James worked the land.