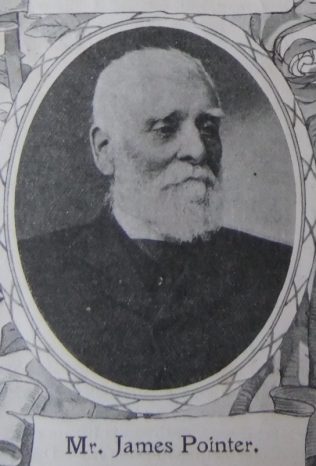 James Pointer, Senior Steward of Norwich First Circuit was born seventy-five years ago at Evingham, Aylsham, and spent his early life at Sloley, North Walsham. His parents were among the early stalwarts who were founders of our East Anglian Church, and their son was converted at a cottage meeting in 1851. His membership has remained unbroken and not only he and his parents but his wife and descendants are all members with us. “I don’t know anything about any other people but Primitives,” he says. In 1861 he migrated to Lynn, and became a local preacher on that historic station, nut for the last thirty years he has been resident in Norwich. This space is for biography not for eulogium, or much might be said: so we only add that his worth has been recognised by election to District meeting and Conference, and by his circuit’s love and trust.

James was born abt 1831 at Hevingham, Norfolk, to parents Thomas Pointer and Elizabeth Ebbs. James was baptised on 3 April 1831

Thomas was a hand-loom weaver (1861) and later worked the land.

James progressed from working the land to being a Norfolk fowl dealer at the time of the 1861 census. On moving to Norwich, he became a coal merchant.