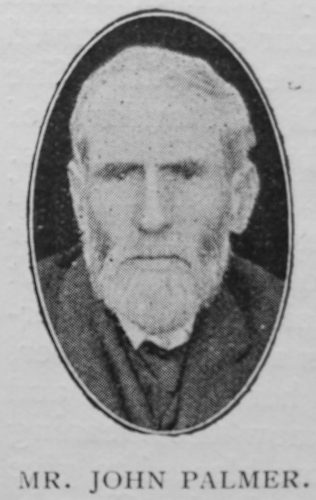 Transcription of obituary published in the Primitive Methodist Magazine by T. Allison Brown

Hull Fifth Station, and especially the Hessle Church, in the death of Bro. J. Palmer lost one of its most esteemed officials and workers. Born in 1846 at Alwick (Atwick), near Hornsea, he joined our Church in 1862, and, “without any ins and outs,” as he loved to express it, was a consistent member. Subsequently he removed to Hessle, where, as local preacher, Society steward, S. S. teacher, and Class leader, he rendered exceptional service.

A most loyal Primitive Methodist, no toil was too arduous, no sacrifice too great for him when the interests of his Church were concerned. Beloved by all the villagers, his sturdy manliness, transparent honesty, tolerant spirit, and withal his kind and gentle nature, evoked the highest appreciation. He hated shams and parade and “shunned the appearance of evil.” Anything calculated to bring dishonour to the name of Jesus Christ he met with unqualified hostility. He was an earnest advocate of Class Meetings, and passionately loved the one at Hessle, over which he presided for many years. So solicitous was he for its welfare, that, on his death-bed he urged his Assistant Leader (Mr. J.F. Brown) to pay special attention to it.

His death came as a great surprise to many, but proved intensely sublime, and a lesson in heroism to all who visited him. When he realised the nature of his complaint (cancer), and the inevitable end, he murmured not, but with charming grace submitted to his Father’s will. “I have no regrets,” said he, “but many things for which I will praise my Maker.’’ Death had no terrors for our brother, for “he suffered as one who seeth the Invisible.” Especially did he rejoice because all his sons and daughters were actively engaged in Christian work. Like the flowers he loved so well, he was in character, beautiful — in influence, fragrant.

John was born abt1848 at Atwick, Yorkshire, to parents James, who worked the land, and Hannah. He was baptised on 27 February 1848 at Atwick.