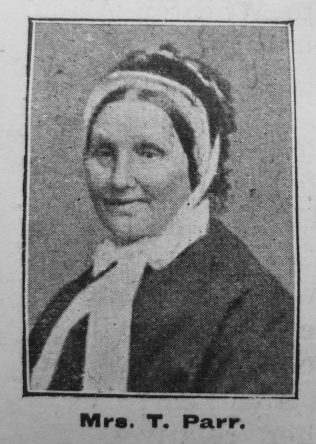 Matilda, relict of the late Rev. Thomas Parr, and mother of the Rev. Theophilus Parr, M.A., and J. Tolefree Parr, exchanged mortality for life immortal on July 12th, 1902. She was the daughter of Mr. James Bayley, and was born at the Mill House, Wheaten Aston, Staffs, on March 18th, 1822. In her earliest years she attended the Congregational Sabbath School in her native village, where deep religious impressions were made upon her youthful mind. When the Wrockwardine Wood Circuit missioned “wicked” Aston, as it was then approbriously termed on account of its notorious drunkenness, Sabbath desecration, and brutal sports, Mr. Bayley joined the infant society, and became a tower of strength in connection with the newly-formed Church. He became a local preacher, class leader, and was first and foremost in promoting the welfare of the society. His home was always open for hospitality to the and lay preachers.

In the year 1845, Miss Bayley was married to the Rev. Thomas Parr, who was superintendent of the Stafford Branch of the then extensive Wrockwardine Wood Circuit. She subsequently shared the joys and sorrows of a minister’s life in Dawley, Presteign, Bishop’s Castle, Whitechurch, Ludlow, Oswestry, Newcastle-under-Lyme, Bloxwich, Cardiff, Bradwell, Birkenhead, and New Mills Circuits. Although she was the mother of twelve children she found time for leading society classes, tract distribution and the visitation of the sick. When her husband was appointed by Conference to open the Cardiff Mission she helped considerably in laying the foundation of its future prosperity. Although she possessed no striking intellectual gifts, yet she was a true mother in Israel. Her life was characterised by deep piety, and practical sympathy for the care-worn and the sorrowful.

At the comparatively early age of 44 she was left a widow, with the up-bringing of seven fatherless sons and daughters dependent upon her. For a time she resided at Birkenhead, and ultimately removed with her youngest daughter to Wheaton Aston, where she lived in a house which had been built by her late father. In recognition of the Divine care of a covenant-keeping Jehovah, she called it “Providence Cottage.”

For nearly two years before her decease her mind had been beclouded, and she was carefully ministered unto by her daughter, Mrs. Abraham Weate. A few hours before she passed away she gave the clearest evidence of her unshaken confidence in the promises of God. By her smiles and hearty handclasps she recognised her relatives who gathered at her bedside. In her last moments of consciousness she tried to sing with a faltering voice:
“My rest is in Heaven, my rest is not here,
Then why should I murmur whilst Jesus is near,”
and then in a mere whisper, she added:
“And this I shall prove, when with joy I remove
To the Heaven of Heavens, in Jesus’ love.”

Mrs. Parr was the last surviving member of a large family of nine brothers and sisters. Just before entering the valley, she exclaimed with rapturous surprise, “Why, they are all here!” evidently referring to parents, husband, brothers, sisters, and children who had predeceased her, and who were giving her welcome to the glory-land. Peacefully, and without a struggle, her happy spirit passed away to be for ever with its Lord. She has left five sons and daughters and seventeen grandchildren to follow in her footsteps to the better land.

On the following Thursday her remains were taken to the Wheaten Aston Primitive Methodist Chapel, where she had so frequently worshipped, and with which for many years to come her memory will be associated. The service was conducted by the Rev. Albert A. Birchenough, in the presence of a large and sympathetic congregation. Her body was laid to rest in Lapley Churchyard, near to that of her late husband.

Matilda was baptised on 7 April 1822 at Lapley, Staffordshire. Her parents were James, a miller, and Mary.