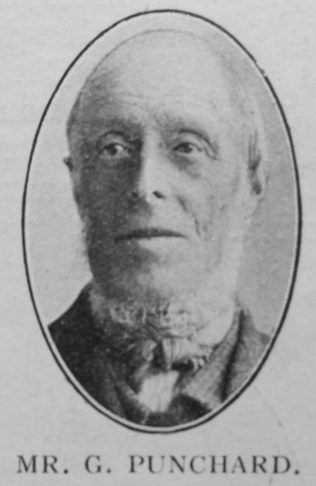 Transcription of obituary published in the Primitive Methodist Magazine by J.C.M.

George Punchard, of Withersdale, Suffolk, was born 28th January, 1834. From his conversion in 1861, he was one of a devoted band of men and women who by open-air work and in cottage meetings laid the foundations of Primitive Methodism in the neighbourhood. He was a member at Metfield until a chapel was built at Withersdale. Then he became society steward of the new church, and superintendent of the Sunday School, offices which he retained without a break until his death.

As a lad, Bro. Punchard was trained in the school of hard work, and his occupation of farm labourer meant through a long life arduous toil and small wages. Notwithstanding these disadvantages he became a well-educated man. As a preacher he was forceful, eloquent, and acceptable. As a politician his services were in great request, and his influence was always felt against privilege and for freedom. He was a “tribune of the people,” respected, honoured, loved.

In the days of agricultural depression, now happily passing, Withersdale Church had its difficulties, but its leader never faltered, and the prosperity of our church to-day is largely owing to him.

His passing, July 17th, 1909, is a great loss to the church and village. But his memory is a rich inheritance. His widow and some of his family are still with us in Church fellowship.

George was born on 28 January 1834 at Redenhall with Harleston, Norfolk. His marriage record records George’s father as Edmund Punchard