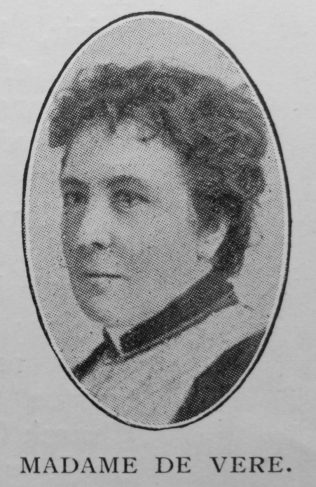 Madame Parry de Vere, better known as Miss Mabel Parry, passed to the Homeland quite unexpectedly and almost suddenly at her home in Leeds on Christmas morning. For some three or four years. she had resided in Leeds, but retained her membership at Kilburn Lane, London. She was by birth a Londoner, being born in Curten Street, Mayfair, February 6th, 1848. London never lost its charm for her. In those days her parents were in fairly affluent circumstances and gave her a good education.

She was considerably gifted, quick to learn, and all her life long seemed more at home in literary and evangelistic than domestic work. At an early age she became governess in the family of General and Mrs. Booth, and great was the spiritual influence of Mrs. Booth over of the young governess. She loved the Booths and always spoke highly of them. After some time, she took up evangelistic work with the Christian Mission, and some years later, when Dr. Samuel Antliff was Missionary Secretary, she, with several others, joined our Church. From that time she devoted herself whole-heartedly to mission work in our Connexion, at first under the direction of the G.M.C., and later on at the requests of Circuits.

Her sermons and addresses were able and useful, and her converts many. She was widely known, having laboured in most parts of the Connexion. She was strong in her attachments, unselfish in her labours, loyal to our Church, and generous to the utmost of her. ability. Her interest in our Church never flagged. She now rests from her labours and her works follow with her. “Blessed are the dead which die in the Lord.”