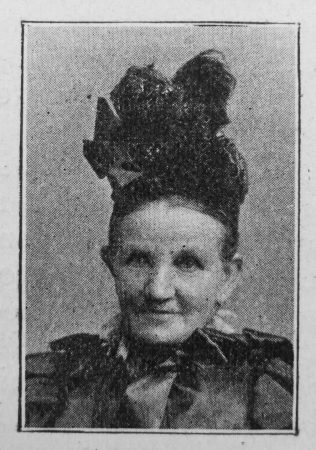 Transcription of Obituary in the Primitive Methodist Magazine by J.T.C.

Mrs. Postles was born in the village of Moulton, in the county of Chester, March 11th, 1837. She had entered upon wedded life before she became a decided Christian, but gave herself openly to Christ in our Moulton chapel in June, 1855. Her husband was also converted the same night. She at once joined our Church, and began to labour for its welfare, and her loyalty never wavered and her zeal never cooled unto the day of her death.

The first twenty-eight years of her Christian life were spent in the Northwich, and the last twenty in the Chester First Circuit.

She never held any official position in our Church, but not very many have rendered more real and successful service.   Her personal character helped to give strength to her Church. She enriched her class-mates by her experience, her counsels and her prayers, ands commanded the respect of the non-Christian world by her unaffected consistent walk. She was most regular and constant at the services of the sanctuary, faithful to every work she undertook for the Church, and according to her ability she was always ready with her purse to aid the work of her own Church and the institutions of the Connexion, while the poor and the afflicted found in her a ready helper and a sympathising friend. Her cheerful hospitality to ministers, travelling and local, was for many years proverbial.

But her most effective and her most valuable Christian ministries were in her family life. She so trained and disciplined her children, and so presented Christ in her life and conversation that all of them, four sons and three daughters, took the vow of allegiance to their mother’s Christ when young.

She was in failing health for some time before her departure, but able to exercise some supervision over her household and to take some part in the work of the Church almost up to the last day of her life. Her end was altogether unexpected. She was under a partial, promise to take tea with a friend, but feeling weary she lay down and slept, and awoke in heaven, June 4th, 1903.

Sarah was baptised on 9 April 1837 at Davenham, nr Northwich, Cheshire. Her parents were Thomas, a joiner, and Sarah.

She married Thomas Postles (1832-1912) in the summer of 1853 at Liverpool, Lancashire. Census returns identify seven children. Census returns up to 1881 identify Thomas as a worker in the salt industry. Later census returns show him to be a grocer. The switch in occupation appears to have coincided with the move to Chester.