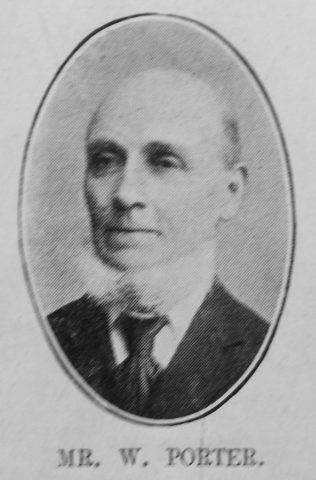 MR. WILLIAM PORTER, of Hinckley, passed to his reward December 20th, 1908, after a short but severe affliction. A native of the town, in early life in comparative poverty, he commenced business as a leather merchant, and by his integrity won the confidence of those with whom he did business. He found time to attend to the wider interests of the town, and for years he sat as a member of the Local Board. He was regular and punctual in his attendance at all the services and generous in his gifts.

At the age of eighteen he experienced a genuine conversion. Possessing more than ordinary ability, many were the calls made upon him. For forty-eight years he served as a local preacher. Soon after his conversion he entered the Sunday School as teacher and afterwards became superintendent. When he retired from this office an illuminated address was presented to him.

As a class leader he was quaint and original. His class contained sixty members when he died. Very apt in the sick room, he was frequently called upon to pray with the dying.

A widow, four sons and three daughters mourn his loss. His funeral was largely attended by all classes of society. Local preachers and class leaders bore him to the grave, and when the writer preached his funeral sermon on January 3rd, the chapel was crowded in every part.

William was born in late 1840 at Hinckley, Leicestershire, to parents William, a shoemaker, and Sarah.

He married Charlotte Bailey (1838-1916) in the summer of 1859 at Hinckley. Leicestershire. Census returns identify twelve children.