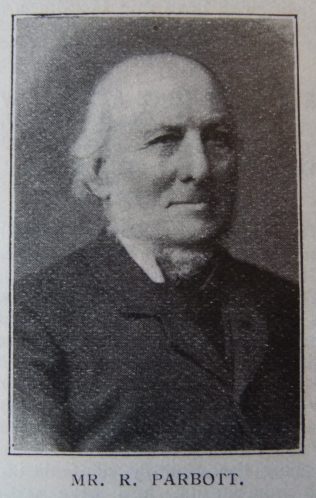 The name of Richard Parbott may deservedly be added to the list of Local preachers who have distinguished themselves by useful and estimable qualities. The testimony of his numerous friends is that he is a man of unimpeachable character, that he has a beautiful soul and has lived a beautiful life, and is now beautiful as the mellow autumn of a rich glorious summer. In him Nature has fulfilled her work, lading him with blessings and with the fruits of a well-spent life. His long and interesting experience has, as its predominant note, the unfailing goodness of God, and of this he never fails to remind his friends. His spirit of appreciation and gratitude occasions no surprise when we remember that Nature, having blessed him with a sound constitution, he has enjoyed robust health, unbroken by sickness until within the last two years, when symptoms of physical infirmity appeared. His gratitude derives an additional incentive from the fact that his children are identified with the Church as loyal and devoted members.

Born in 1819 at Yeadon, near Baschurch, his parents removed to Stanwardine when their son was seven years old, and in this quiet hamlet Mr. Parbott has seen eighty summers. As a boy, he was accustomed to worship at the Parish Church, but, about the time he attained his majority, he was induced to attend the cottage services conducted by the Primitive Methodists on Lympit Hill. Here he received impressions for good which resulted in his conversion, and it was soon obvious to all that not only had our brother found the Saviour, but the Church a new and willing worker. In 1843, he received a note from the Oswestry Circuit quarterly Meeting, and from that time he faithfully and unremittingly devoted himself to the preaching of the Cross. He has had many seals to his ministry, one of the firstfruits being the conversion of his mother. As a preacher he took his full share of appointments on the Circuit plan, frequently travelling long distances on the Sabbath, as at that time there were a number of places in the Oswestry Circuit, now included in the Ellesmere, Hadnall, Whitchurch, Rhosymedre, and Lanymynech Circuits. Mr. Parbott is now No. 2 in the list of preachers in the Ellesmere Circuit, and he is happy in the thought that AFTER SIXTY YEARS SERVICE HE NEVER NEGLECTED AN APPOINTMENT. He was never in any sense a timeserver, never aspired to any place of distinction in the Church, but always instant in season and out of season. By the sick and dying his services have been in requisition, and many there are who have been cheered by his presence, comforted through his words, and led into faith in Christ, which made their last days happy and bright with the hope of eternal life.

At that time Bro. Parbott began to take a prominent part in Circuit work, it was his privilege to be associated with a number of remarkable men connected with the historic Oswetry Circuit. Among these may be mentioned Edward Parry, Samuel Ward, Stephen Batho, Richard Mansell, Samuel Davies, who, though they have passed to the great majority, are held in honour to this day. Edward Higgins, who continues his service, May be added to this band of the makers of Primitive Methodism in this District.

The ministry of the Rev. James Huff was the source of great power to our friend, and that revered and now sainted man frequently spoke of our friend to the writer as an example of sterling piety, godly zeal, and one of the pillars of our Church.

The present position of our Church at Stanwardine is due in no small measure to the influence and labour which Mr. Parbott has given it. The attendance at the cottage service was so large, and the society so prosperous, that there developed the desire to build a chapel to which the occupier of the cottage strongly objected. It is a strange story to relate, how this opposition was, as the villagers said, providentially frustrated. The cottager was a workman on a neighbouring farm, and one of the farmer’s daughters returned home suffering from a disease, which was diagnosed as smallpox; and, singularly, the only person to contract the disease was this workman. This necessitated the services being held elsewhere, and the only place available was Mr. Parbott’s house. In the meantime, as the cottager regained his health, Mrs. Parbott was afflicted, and for her sake the services were continued in her home. Here the attendance increased, and the desire for building a chapel began to take practical shape: and Mr. Parbott, having purchased some land, very generously gave a site on which the chapel was erected in 1869. For this sanctuary Mr. and Mrs. Parbott begged and worked with untiring zeal till they succeeded in wiping off the debt. This Bethel is, to them, the dearest place on earth. They can surely say, “Lord, I have loved the habitation of Thy house and the place where Thine honour dwelleth.”

Mr. Parbott has given of his best, time, thought, money, and exertions, to sustain and promote the welfare of the Church, the treasurship of which he has held for over thirty-six years. His office as class-leader extends over several decades, and in seeking the spiritual advancement of the Church, he has, at the same time, studied to serve the Circuit finances with such success that he is generally regarded as an ideal society steward. Though for some time he has been confined to his home, he has retained his offices and continues to exercise a keen interest in everything that pertains to the prosperity of Zion.

In matters ecclesiastical or political he courts no man’s smile and fears no man’s frown. He is a believer in the principle of total abstinence. But the most prominent feature of our brother’s life has been his intimate acquaintance with his Bible. The ready way in which he refers to uncommon passages of Scripture reveals that he has been a close student of “the Book;” and having formed the habit of prayer all through his Christian life, he is quite familiar with the throne of grace.

To visit the home, which has given hospitality to our preachers for many years, is to taste the sweetness and perceive the blessedness of life consecrated to the service of God. To give expression to our deepest desire would be that Mr. and Mrs. Parbott may have many days added to their years, and that their eventide may be a period of rest and the morning a call to the higher service in which there is no weariness.

“Thrice blest whose lives are faithful prayers,
Whose loves in higher love endure;
What souls possess themselves so pure,
Or is there blessedness like theirs?”

Richard was baptised on 21 May 1820 at Baschurch, Shropshire. His parents were Richard, who worked the land, and Martha.

As a youth Richard also worked the land but, by the time of the1861 census, he had developed a grocery business.

Richard died on 16 December 1907 at Stanwardine in the Fields, Shropshire.