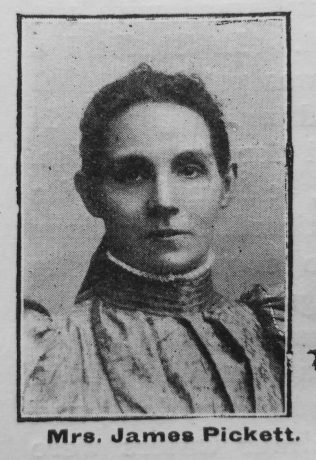 Transcription of Obituary in the Primitive Methodist Magazine by H.

Early on Monday morning, May 18th, 1903 – almost with the passing of the Sabbath – the beloved wife of our Missionary Secretary ascended to the abiding home of the Father, thus beginning a ministry for which all her forty-five years had been at once a seminary and practice ground. Her earliest years gave promise of the unusually useful life which followed, for even in youth her devotion as a daughter and sister, and her activity in the Church of her family, won the admiration and affection of all who knew her. One of the things conspicuous about our loved one was the fine balance she maintained, by which first things found first place, so that, while neglecting nothing, succeeding in the scholastic profession which by choice she entered, her supreme affection for the Kingdom of God was always obvious, and meant the culture of qualities which, in later years, marked her as one of “the excellent of the earth.”

When, just over twenty-two years ago, she became the wife of our present Missionary Secretary, she found a sphere for which, by natural gifts, by training, as well as by preference, she was supremely fitted. Into the varied experiences and duties of a Primitive Methodist minister she brought an absorbing and affectionate interest. No loyaller daughter of our Church has ever served it, and, alike at old Trinity Street, Forest Hill, Leicester and Hull, scores of grateful hearts, in these days of shadow and loss, have borne eager tribute to the statement that, beautiful as was her devotion as wife and mother – loving and serving her six surviving children with absolute unselfishness – yet she delighted in all her husband’s work, and of her strength and ability freely gave to the Churches over which he has been called to serve.

Her home was a veritable “temple of peace,” and she presided over it with an ease, a naturalness and a charm which wrote its welcome without the necessity of speaking it. Industrious and unceasing as she was in the Church, the Sunday school, and Christian Endeavour, it was not at the expense of home or of children. She so skilfully made the sanctuary roof to embrace the hearth-stone as to make of both one Church, leaving a memory and heritage for her family as tender as it is precious and imperishable.

The balance by which, through Divine grace, life started right; gave supreme dignity and sweetness during the last four and a half years of suffering. What cheerfulness! What a summer-like brightness! What an eager, sympathetic interest in others’ suffering! Was there ever a gradual relinquishing of happy duties with less repining or thought of sacrifice than was witnessed from her sick room? There was a heroic effort to live, for life was inexpressibly sweet and attractive to her, yet not even once during these long years did an unworthy criticism of God’s ordaining providence escape her lips. “You must let me go,” she said to her husband, when, in recent days, he asked with a tender solicitude what he could do for her. As we marked her quiet confidence in the eternal, and noted, not so much the absence of fear, as the delightful mastery of death which out-soars it, and judges it from afar, we could only say, “It is the Lord’s doing, it is marvellous in our eyes.” A nature exquisitely sensitive, supremely happy in all her earthly relationships, and at an age when life would have been easier for her, so admirably fitted to accompany her husband into the larger opportunities of connexional position, she “endured, as seeing Him who is invisible,” and, so far from seeming sad that it was denied her, or making those around her grieve because of her grief, she came up to death as a victor, and death proved to be for her “the crown of life.”

Very remarkable are the unsolicited, yet beautiful testimonies to the unique influence she threw about those who knew her.

The Secretary of the Jarratt Street C.E. Society (Hull), writes: “All of us, who came within the sphere of her influence, feel that the debt of gratitude we owe to her will be eternal. Not only has she revealed to those of her own sex the possibilities of a true and noble womanhood, but she has increased in us all reverence and love for the highest things. We thank God that He sent into our midst such a beautiful life and spirit.”

The Rev. W.E. Crombie wrote: “We all feel that a very choice spirit, an elect soul, and a notable saint, has left us for the larger world of vision and service.”

The Secretary of the Ministers’ Board at Leicester, writing from the meeting of ministers, says: “It will often comfort you to think of God’s goodness in bestowing on you such a treasure, sparing her to you so many years, and in enabling her to contribute so largely to the blessedness of your life.”

Mr. T. Lawrence (African Missionary Treasurer) says: “The high opinion I formed of Mrs. James Pickett eighteen years ago has been more than justified by more intimate knowledge. She was a woman of more than ordinary force of character, and moral and intellectual qualities. She really adorned every sphere she filled with equal grace, fidelity and charm. While she discharged every domestic duty, she yet found time and strength to serve the Church. Her influence with young women was almost phenomenal. Her knowledge of scripture, her keen spiritual insight and exemplary character, gave her a premier position as the teacher and guide of young women, and withal she was so modest, quiet, and unobtrusive. If she engaged in public prayer outside the young women’s class, it was not as a formal habit, but by force of a spiritual compulsion which gave peculiar power and pathos to her pleadings at the throne of grace. Many in all the circuits to which her husband ministered owe their conversion to her influence and piety, and are among the numbers who mourn her departure. Her memory is blessed. May the God of all comfort sustain and help the bereaved.”

We laid the precious dust to rest at the Leicester Cemetery, on Thursday, May 21st, in the grave of her little Edgar. The service was beautiful in its simplicity, fitting the dignity of the memory we so revered. Friends from Hull, from Mayfield Grove, Nottingham, friends of the Curzon Street and Hinckley Road Churches, Leicester, the young women who had been won to nobler living by her teaching and example came to pay their tribute of loving memory to one of earth’s noblest and best.

Louisa was born in 1857 at Wooton Bassett, Wiltshire to parents Richard, a plasterer, and Mary Ann.

Louisa died in the Basford Registration District, Nottinghamshire, and was buried at Welford Road Cemetery, Leicester.