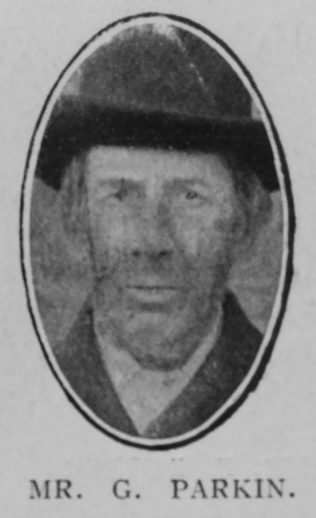 Transcription of obituary published in the Primitive Methodist Magazine by G.P.M.

The venerable George Parkin was the last surviving member of a band of men connected with Thorpe Hesley, in the Sheffield Third Circuit, who were widely known for their fervent piety, untiring devotion, and their service to the Church. He lived to be the oldest member of the Thorpe Church, and the oldest resident in the village.

He did his best work a generation ago, amid hardship and difficulties, inspired by faith, and sustained by grace. He held many official positions, notably that of Sunday School Superintendent. He had a burning passion for the salvation of the young, and possessed the talent for patient continuance in well-doing. His loyalty remained unshaken, and his faith was triumphant to the end. His long and faithful service was recognised in 1908 by the presentation of a diploma of honour and a medal. He had then been a School worker for 55 years.

In his later days he suffered much affliction with exemplary patience, and welcomed the coming of his Lord on April 12th at the ripe age of 83 years.