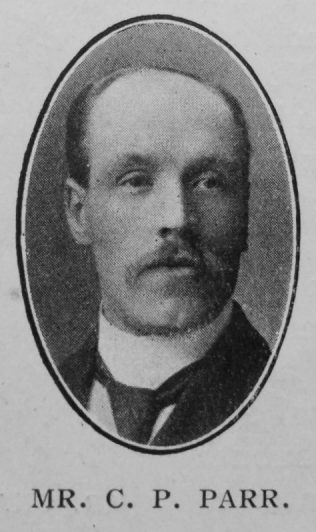 Transcription of obituary published in the Primitive Methodist Magazine by W.A. Eyre

Charles Philip Parr, of Stafford, was born December 16th, 1876, and departed this life January 16th, 1912. He was a brother beloved by all who knew him, and the large and representative numbers present at his funeral and memorial services testified to the esteem in which he was held. He was bound by many ties to the Primitive Methodist Church. Both his great-grandfathers were associated with our people. One of his grandfathers was the Rev. Thos. Parr, and his uncles are the Revs. Theophilus and Tolefree Parr.  His parents also have been for many years associated with our Church.

When but seven years of age he responded to the Divine call. In “the trivial round and common tasks” of life, as well as in the discharge of duties associated with the work of the Church, he sought to adorn the gospel of Christ, and was ever diligent in well doing. For many years he was a patient, plodding missionary collector. His box—which had been handed to him by the late Mrs. J. Adams on her death-bed —he cherished as a precious heirloom; and two days before he passed from these earthly scenes he was busy counting up his contributions to satisfy himself that the present year’s total would be equal to the last.

For some time past Brother Parr was one of our Stafford Sunday School superintendents—a position for which he was eminently fitted, both by nature and training. By his departure we lose a willing and efficient worker, one who was in the best sense of the word a consistent Christian gentleman. He leaves a widow and one dear child, who, with others of his loved ones, await a happy reunion in the realms of the blest.

He married Rhoda Pinson (1877-1929) in the spring of 1908 at Stafford, Staffordshire. Census returns identify one child.