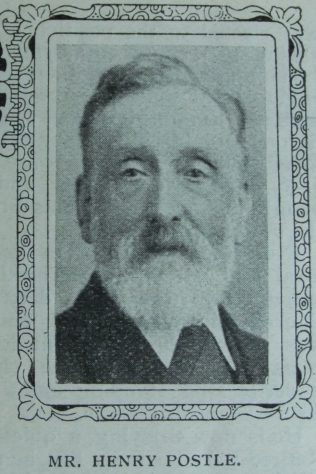 Mr. Henry Postle was born in a small Norfolk village in 1826. His parents had a large family and seem to have taken no interest in their spiritual welfare. As a lad he was very fond of worldly amusements up to the age of seventeen, when he was prevailed upon to attend some cottage services held by the Primitive Methodists; here he was convicted of sin and eventually found peace in Jesus Christ. This was indeed a memorable moment in his life, for which he has not yet ceased to thank God. He worshipped for some time with the friends in North Walsham, commenced local preaching, and was elected to the position of class leader. Owing to lack of employment he came to London in 1852, having then a wife and child. He identified himself in the June of that year with the Kennington Society in the London Second Circuit, which for some time worshipped in a room in a public-house. In October 1859, the society rented and subsequently bought a chapel in Thomas Street, the site of the present premises.

Ever since he joined us he has proved a loyal and an ardent Primitive Methodist, entering into th various departments of our Church with consevrated enthusiasm. He was school superintendent for over twelve years, a trustee for three chapels, a class leader of long standing and a local preacher for well over fifty years.

He is now enjoying a quiet evening time. Retired from business life, he spends this time visiting our sick friends and looking after his members, His seat in church is rarely vacant, and his influence in any meeting is remarkably rich and helpful.

May God spare Henry Postle for many years to the Church he has served to faithfully and to his many friends who love him so well.

Henry earned his living as a carpenter.