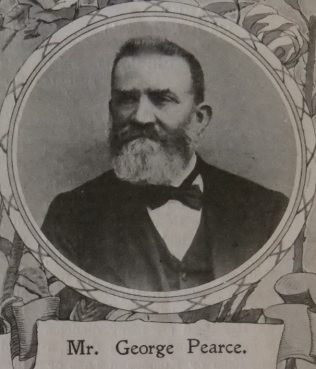 Coming from Andover Circuit forty years ago, Mr. George Pearce settled down in the town of Pontypool, attached himself to the Park Terrace church, and for three decades has been one of the most loyal and active officials in the Circuit. He is now in his seventieth year and for half a century has consistently maintained his membership of the Primitive Methodist Church.

His work and interest as an official have been manifold.

As Sunday School Superintendent, Society Steward, Class Leader, Trustee and Trust Steward he has served his church with constancy and fidelity. He has also passed through the official positions of the Pontypool and District Sunday School Union including that of President.

Nineteen years ago the Quarterly Meeting appointed him to the office of Circuit Steward, and that seventy-six succeeding Quarterly Meetings have renewed the appointment evidences an unwavering confidence in his shrewdness and an increasing appreciation of his Christian worthiness.

William was born in 1837 at Alton, Wiltshire, to parents William and Jane. William worked the land.

After George moved to Pontypool, he worked as a warehouseman in a corn stores.