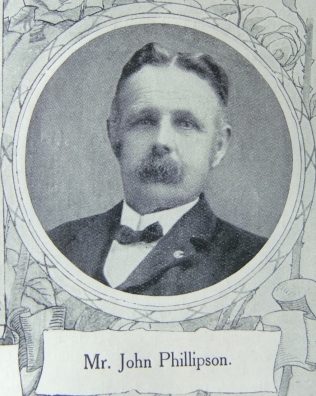 The honours and responsibilities of the Chancellorship of the Swinefleet Circuit have only recently devolved upon the shoulders of Mr. Phillipson. But all his life of fifty-one years he has been a devoted primitive Methodist. He takes an active interest in Circuit affairs, being seldom absent from the Quarterly Meeting. He is Steward and Leader of our Whitgift Church. He wields a subtle, but unobtrusive influence over the young people, most of whom are members of the Church, as are the members of his own family. He is an ardent Endeavourer. He is also a capital organiser, and always has some scheme in hand for the development of Church work. Mr. Phillipson also takes great interest in Connexional matters. He is a generous contributor to the Centenary Thanksgiving Fund. He is a Minister’s true colleague and helper, and a faithful Steward.

John was born abt 1859 at Keadby, Lincolnshire, to parents George and Mary Ann. George worked the land. John was baptised on 13 March 1859 at Epworth, Lincolnshire.