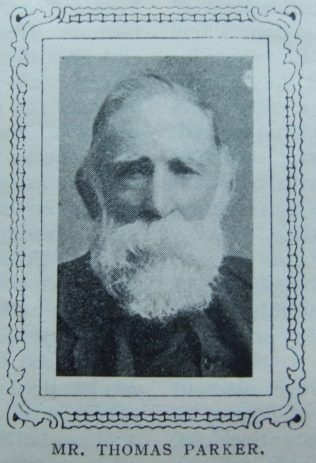 MR. THOMAS PARKER is a Cornishman, born November 13th, 1840, at St. Blazey. His mother was a Primitive Methodist.

He received his early education in the village school, but when thirteen years of age he became apprenticed to a stone mason. With the exception of three years, when he was at Shipley, he has spent the whole of his life at St. Blazey. Converted in 1855, he has been a Primitive Methodist ever since.

The second Sunday after his conversion he was invited into the choir, and is now choirmaster. He has been an ardent singer and has always had charge of the musical part of the service.

At a time when this Church was in very low waters, and when no one else would  attempt to lead the class, he took hold of it and for more than forty-five years he has been one of our Class Leaders, a position he holds at the present time.

Many are the times he has been tempted to give up, but by the help of God he has held on, and is rejoiced to-day to see a steady improvement in our numbers.

There is scarcely an office in the Church that Thomas Parker has not held. For ten years he was Circuit Steward, for thirty years he has been Choir Master, for forty years the Society Steward, for forty-five years the Class Leader, besides being the Treasurer for the Trust Estate. He has never wilfully missed attending the services, and both Sundays and week days may be found in his place, and for all he is beginning to fail in physical strength, he still comes and with joy does what he can to help on the work of God. May his life long be spared among us is the earnest wish of all our workers.

Thomas was baptised on 30 May 1841 at St. Blazey, Cornwall. His parents were John and Jane. John was a stone mason.