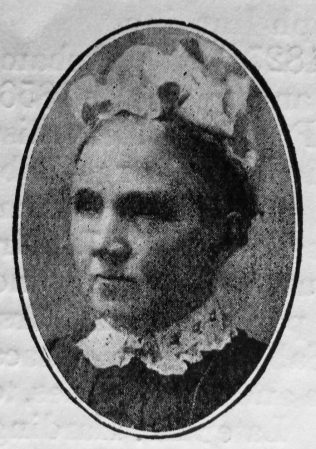 Transcription of obituary published in the Primitive Methodist Magazine by J.P. Langham

At the ripe age of seventy-three, Mrs. Jane Pallin, West Hartlepool, passed away on November 16th, 1907, after a very brief illness. Fifty-seven years ago she joined the Primitive Methodist Church, and at the first Anniversary of the Sunday School, when Hugh Bourne was the preacher, was amongst the singers on the platform. She often spoke of his kindly interest in the children.

From that time till her death her interest in the “cause” never flagged. She was no grumbler, no idler, but a joyous worker in the interests of the church. Her devotion to her own church did not make her a narrow denominationalist. Her heart included in its love all who loved her Lord and Master, but in Primitive Methodist surroundings she had experienced the new birth and she loved the people who had led her into conscious fellowship with her Redeemer.

Left a widow thirty-seven years ago she bravely faced the task of maintaining and educating four little children and wonderfully succeeded. She impressed the value of religion on the hearts of her little ones so successfully that they all consecrated their lives to Jesus and now are rendering valuable service to our church.

Letters have been received from former ministers of the circuit, Revs. D. McKinley, W. Shipley, C. Pettler and others concurring with the above estimate of her character. The things which impressed all who knew Mrs. Pallin were her unfaltering faith in Divine Providence, her sweet disposition, her unruffled temper, her continuous activity — she was always busy in the home or in the Church. To her death was indeed

“A step into the open air,
Out of a tent already luminous with the light
Which shines through its transparent walls.”

In the sweet open air of the upper world she lives, and awaits the coming of those who in faith and patience possess their souls while they follow in her steps.

Jane was born abt1834 at Quorndon, Leicestershire, to parents James, a quarryman (1851), and Maria.

She married Thomas Pallin (abt1833-1870), a blacksmith (1861), in the summer of 1855 in the Stockton Registration District. Census returns identify five children.