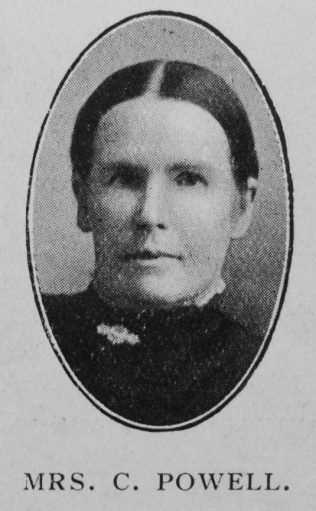 Transcription of obituary published in the Primitive Methodist Magazine by F.L.C.

Our Church at Ellerdine, Prees Green Circuit, has suffered a great loss by the death of Christian Powell. Born at Chester-le-street, May 26th, 1840, when she was seven years of age her parents removed to Crudgington, Salop, where they opened their house to the Primitive Methodist preachers. At eighteen years of age she joyfully found her Saviour, and joined our Church at Ellerdine.

For fifty-three years, at Ellerdine, Hatton Heath, and also in the Hadnall Circuit, she remained a member. In 1865 our friend married William Powell, who now mourns her loss. In 1881 she became a local preacher, and on the Prees Green Circuit travelled many miles in the service of her Lord. She took a large share of the work of raising money for the School and Church at Hatton Heath.

Her last years were dimmed by illness, but the writer can bear testimony to her wonderfully buoyant state of soul. She was ever strong in the confidence that He who had begun the good work in her would complete it. Beside the husband she leaves five children to mourn her loss.

Christian was born on 26 May 1840 at Chester-le-Street, Co. Durham, to parents James, who worked the land, and Margaret.

Christian worked as a dairy maid before her marriage (1861).

She married William Powell (1836-1912), who worked the land (1891), in the summer of 1865 in the Wellington Registration District, Shropshire. Census returns and birth records identify seven children.